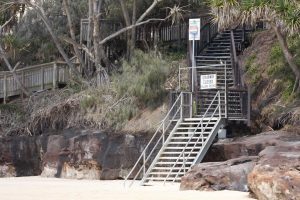 Still no resolution for the beach steps

Cr Mark McDonald, Gympie Regional Council, has provided updates on some hot issues on the coast.

The State Government recently announced that it will provide funding for Council from the Works For Queensland Program to construct a viewing platform in Phil Rogers Park. The location for the platform will be determined as part of the geomorphological study. This project is scheduled for construction in 2019.

Tenders have been called for the new boat ramp and car park at Bullock Point.  Construction is scheduled to start after the Christmas school holidays.

In less positive news, the beach access steps at the southern end of Phil Rogers Park have been closed to the public for several weeks to ensure public safety.

The lower section of the steps will now be removed in order to reduce the risk of sudden failure. By doing this, the upper portion of the structure will be preserved for future use.

Council will be arranging further assessments (geomorphological studies) of the foreshore at Phil Rogers Park to determine whether there is a more suitable (stable) location for the stairs.

The necessary studies will be carried out as quickly as possible but considerable work is involved in this.  At the current time we can’t give a timeframe for the steps to be rebuilt.

Considering how expensive the previous geomorphological study was, the Community News asked if there was some liability or responsibility on that company to provide a further assessment at their cost? Or has Council engaged another company?

Cr Mark advised a geotechnical engineering consultant inspected the site and provided the concept design for the stairs. Council staff are in discussions with the consultant.

A geomorphological consultant is yet to be engaged to assess a more extensive area of the foreshore at Phil Rogers Park to determine a more suitable location for the stairs.

The Community News also pointed out that the grass around the new playground in Laurie Hanson Park is dying, and suggested an irrigation system would preserve the new turf. Cr Mark said the new turf will be watered to keep it alive during the current dry spell.