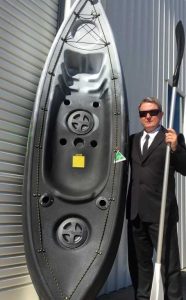 Glen Heaton is donating a Seabreeze Kayak for the Seafood Festival Dinner ‘black and white’ fundraiser – and there are many more prizes to bid for or win!

The seafood festival dinner is slightly different this year, in that it is a black and white event in formal attire held on September 10.

Cameron Henderson from the Tin Can Bay Chamber of Commerce said, “We opted to add a little bit of difference and felt that there’s not a lot of opportunity for people to get dressed up on the Coast.”

The overall format of the dinner will be the same and “that will include a charity auction and raffles to support local youth sporting organisations. As youth are the future of the region we aim to raise $4000.”

Alice Benfer is the musical entertainment on the night, whilst Graham Engeman will again be the Auctioneer.

“We have some great items to raffle and auction and would appreciate some larger ticket items to be donated for the auction.

Seabreeze Kayaks have donated a black and white kayak and paddle and breezy wheels valued at over $600, with other businesses such as Australia Zoo and two whale watching cruises to be auctioned off.

Cameron says the Seafood Festival is not far away – September 24.

“This year we are introducing a laser tag game and also bringing back the skateboard competition.

“It will be run by the guys from Gympie’s Pipe Dreams indoor skate park and the competition may have a surprise judge. Entry to the competition will be by gold coin donation with prizes to be won.

“The usual activities will be there, the mullet throwing and prawn eating comps. There will be stage entertainment, some new stalls, both market and food. Matt Golinski will be there with his popular food cooking demonstrations.

“It wouldn’t be a Seafood Festival without the Reibel family and friends representing the seafood industry in Tin Can Bay, serving both hot and cold seafood on the day.”

So keep the day free!

Tickets for the Seafood Dinner can be purchased from the venue, Tin Can Bay Country Club.