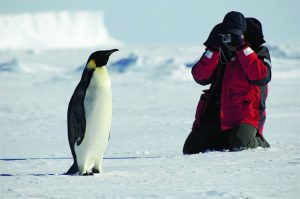 Your guide to the world’s last frontier

Once an exotic place people hoped to see, traveller’s dreams are becoming reality faster than ever, and Antarctica is emerging as one of the must-see places. But how do I get there?

Expedition cruises departing from Ushuaia, at the southern tip of South America, are the most popular way to get to Antarctica.

WHEN IS THE BEST TIME TO GO?

As an early-season visitor, be rewarded with pristine landing sites, dramatic ice formations, animal courtship routines, and excellent photographic opportunities courtesy of the lightly setting sun. You may see packs of elephant and fur seals marking their breeding territories in the sub-Antarctic islands.

MID SEASON (DECEMBER – JANUARY)
Temperatures are at their warmest, and longer days means there are more opportunities for landings. Expect to see sunbathing seals, adorable penguin hatchlings, and increasing numbers of whales arriving for the summer. Coupled with calmer seas and less sea ice to prevent you from reaching the shore, you can see why many people choose to travel at this time of year.

LATE SEASON (FEBRUARY – MARCH)
February is peak whale spotting season, seal numbers are up on the peninsula, and penguin rookeries are bursting at the seams on South Georgia. The shorter days provide sensational sunsets, awesome night-time sky gazing and some of the best value-for-money expeditions of all.

Come along and find out more at the Travel Expo on February 4 at the Tin Can Bay RSL Sub Branch. All enquiries to bucketlist@abovebelowbeyond.net or 07 5488 0008 or find us on Facebook.