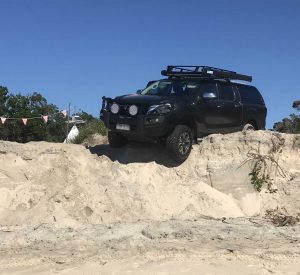 Drivers beware and adhere to signs, as conditions change all too quickly on our beaches

If you look carefully at this photo, it is apparent that there are warning flags strung across this beach access track at Inskip Point.

It is a one-way track that usually leads down onto the beach, but had been cut off recently due to the large tides and swell, causing a number of sand ‘cliffs’ in the area. As a result, authorities ‘flagged off’ the track as a warning of the dangers ahead…

Now, most people would approach warning flags like this and their brain would perform some form of computational analysis of the situation before them. Deductions would be made. Reason would prevail. Conclusions would at least likely include: “there must be some kind of hazard ahead”.

In an ideal world, this would result in evasive manoeuvres like “stop” or “turn around” or maybe even “check it out”.

But not in this case. This driver saw red flags across the track – and their cognitive capacity became overloaded. “Brain does not compute” seems to have been the extent of it.

So, the flawed deduction then made was: “me must have to drive around these flaggy things”.

Only once becoming stuck (and nearly rolling off the edge) did this driver think: “ohhh – maybe this cliff is why those pesky flags were back there…”.

It left me contemplating along these lines: if authorities can’t even erect signage to stop some people from driving off a cliff – what hope do we have of getting them to comply with other basic road rules?

Interestingly, in this photo you can also see the top of a white triangle. This is one of the navigational markers for boats crossing the Wide Bay bar. Again, authorities erected this marker for a reason: to keep people safe.

So, whether it’s a navigational marker on the water, flags across a track, or road signs that indicate a speed limit – they are all there for good reason. They may even save you from driving off a cliff. Ignore these signs at your peril…