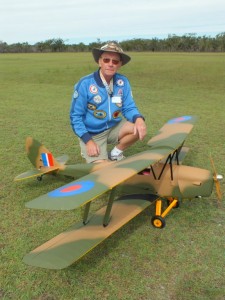 Warbirds and the Bay to Bay Yacht Race are always on the same weekend.  Nic Case from the Tin Can Bay Model Flying Club said, “Warbird pilots want calm conditions, whereas the boaties want a bit of wind.  The Weather Gods must have decided this year to look favourably on the boaties as quite a strong westerly wind of around 25 knots blew both Saturday and Sunday.  These winds were much too strong for the smaller and lighter aircraft and only the bigger and more powerful aeroplanes were able to take to the sky.”

Friday evening saw three storms move through Tin Can Bay, with water about 50mm deep running across the airfield.  However by morning, it had disappeared into the sand.

Although the wind was strong and not in a favourable direction, he said the larger planes were able to fly continuously to give the public a taste of an airshow. 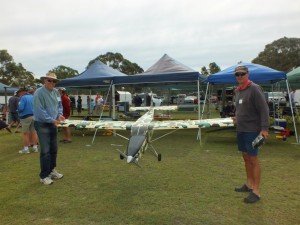 “Saturday saw Peter Love and Shaun Chillicot put on a spectacular display by flying their Panther jets in formation.” Nic explained,”Formation flying takes a lot of practice and a lot of talking between the pilots on the flight line to know exactly what the other pilot is doing.  Usually one pilot leads the calling of manoeuvres and the other pilots follow closely behind.”

The event drew crowds onlookers – some for the first time. Fiona Worthington said it was mesmerising for kids and their parents, a real family friendly day out.

“It was a great day out! Very interactive, with flyers happy to share their passion with everyone. James is now set to join the club and begin their flying adventures. I’m not sure who is more excited, James or his Dad!” said Fiona. 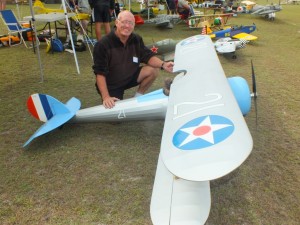 The Model Flying Club wishes to thank the Cooloola Coast public for their many years of continuous support and they look forward to next year’s Warbirds. Who knows perhaps next year the weather may favour the pilots?