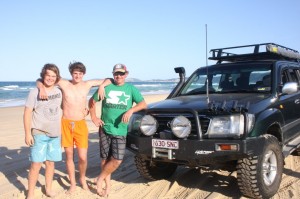 Regular visitors James Sharpe, Bailey and Paul Berriman from Gympie would like to see the beach fees disappear

It has been a long wait – five years since the 4WD protest held on the empty centreblock, driving up to Double Island Point.

Retiring Member for Gympie, David Gibson MP has fulfilled his election promise of 2009 after years of lobbying, and helping local business owners and groups push for an outcome.

But who is eligible?

A person whose principal place of residence is in Rainbow Beach can apply.

The solution has drawn mixed comments, although local residents say it is “wonderful”, they recognise that one of the main problems with the fees is the barrier it holds for visitors, and reduction in number of day trippers to our tourist town. And why haven’t our neighbours from the Cooloola Coast been included?

Can’t bureaucrats in the city, realise that their measly 1.4 million dollars (before wages and costs to administer the ridiculous fees) is a fraction of what they have torn from the local tourism industry every year.

How many times have locals decided to stop at Middle Rock to fish or for a drive, because after that they have to pay to continue south to Double Island Point?

It is a physical barrier, drivers must remember to purchase their permit online ($11.40 per day) or over the counter ($17.10 per day).

Local operators have advised decreased revenue since 2009 and feel it is a result of day tripper numbers. 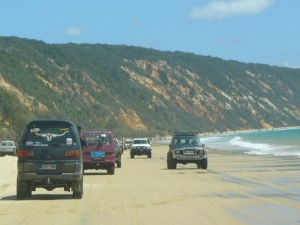 Every other Queensland vehicle access permit is required for recreation areas on islands. Why fleece the locals to play in their mainland backyard? Then add more insult by cashing in on, and depleting the industry that feeds the majority of us?

So why didn’t they include other residents from the coast? Or ratepayers who look forward to spending time in their holiday homes?

The QPWS website states, “This fee exemption applies because Rainbow Beach is the only situation where residents can obtain a reasonable time advantage by travelling to a major shopping and business centre through the recreation area, instead of using an alternative route.”

Even though that is true it is still NOT the reason the fees should be squashed. Most locals drive on the beach for recreation, the reason we moved to this beautiful “Nature Coast” and the reason we pay our exorbitant rates, like other Cooloola Coast residents.

However, there is no doubt that our local MP is to be applauded. To scrape any concession for our small community from our grasping government is an achievement.

Mr Gibson said, “The lifting of the vehicle access permits to drive on the beach will save eligible residents up to $226 a year and is likely to make a significant difference to local people living in Rainbow Beach worried about their bills.”

“This is money better spent in the town and in reality the new exemption will only mean a small reduction in Government revenue, as only about $14,000 or 1% of the Cooloola vehicle permit fee revenue comes from Rainbow Beach locals.”

Mr Gibson said fee-free permits would be issued for a maximum term of one year at a time, and permits would still be required for non-residents.

Details of how to claim the fee exemption, and how to obtain a pro rata refund on existing annual permits with more than three months remaining, are available at http://www.qld.gov.au/recreation/activities/areas-facilities/permits/vehicle/faq-rainbow/ or by calling 13 QGOV (13 74 68) or visiting a QPWS office.

If you are an eligible resident of Rainbow Beach, you can apply for a fee exemption:

Sandy Brosnan (who was part of the delegation to Parliament House in Brisbane in 2009 and to the 2014 Community Cabinet with the Premier) We kept fighting and fighting. David Gibson was absolutely marvellous – right through the exercise. It is not a perfect solution, but as good as what we are going to get, it has been a traumatic five years. It’s our beach – that’s why we can to live here. Ever since I found out I’ve been over the moon.

Paul Berriman It is a good thing for the community – it would be good if we [visitors] didn’t have it, it would make it a bit cheaper and keep bringing more tourists.

Dean Casperson About time, what about people who have holiday homes there ???? Should never of been introduced to begin with as the beach is classed as a designated road.

Heidi Watson Great news though what about holiday people?? We pay to stay so does that include free beach driving?? It’s daylight robbery, we went for a day trip to Double Island and could not believe that it cost $22 just drive up the beach!!! Apparently it cost the ranger $3 to turn on the computer lol!!????

Annamarie Brooklee What about Cooloola Cove/Tin Can Bay residents who also pay taxes and pay rates to the same council?

Camille Nash Free to go to the beach again… Just as it should be! Excellent news!

Jim Cole Great stuff! But I agree TCB/Cooloola Cove residents should receive the same perks. The beach access was one our main reasons for moving to the Cooloola Coast then weeks later the permit was introduced.

Megan Holzberger This is great news! But I do have to wonder how many of the residents protesting [at the 2009 4WD rally] are from Tin Can Bay and Cooloola Cove? Shouldn’t the exemption include all 3 towns?

Most comments were sent to us via: www.facebook.com/RainbowBeachCommunityNews