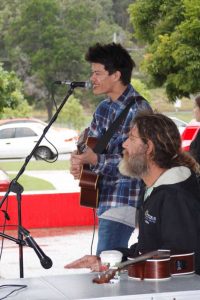 The 2016 Cooloola Coast Art group Art Show, held over the weekend of July 16-17, was another very successful annual event for the group.

And “wow”, what an excellent display of fine art and photography, presented for you by our very own local artists and photographers; to the delight and surprise of some, who were informed that their masterpieces had actually sold.

Indeed, this year’s exhibition was said by many to be an absolute credit; not only to the local artists themselves, but also to the Cooloola Coast Art Group for staging such a fine and well attended special event.

The art and photography had been judged during that day by art judge, Ken Gailer, and photography judge, Ken Chapman; all of whom praised the organisers and the talent and efforts of all those who participated in this year’s event.

Last month Music Plus started the evening with an unexpected move to another hall due to the election preparations, but not even the change of location could keep some away from good music and mighty fine company.

Colleen kept the full program flowing with some stories and poems to warm our hearts and tickle our funny bones. The evening started with a couple of songs from Frank, followed by a sing-along song, an old favourite and an original from Kirstin.

Ron accompanied Debbie on flute and captivated the audience with a lovely arrangement of Summertime. Terry was in good form with some songs and Sarah sang some celtic songs including a sin-a-long murder ballad.

The night started to heat up with some yodelling from Marilyn and a few more sing-along songs with Frank on double bass. Mick and his drumming group led us in storytime with the drum ensemble, where they told a story in rhythm.

Ron returned to sing a few more songs and another singalong before Rob Medcalf finished the evening with some wonderful originals.

The August concert will packed with some wonderful entertainment and another lucky door prize will be given out. Enquiries and bookings for a spot in the concert, contact Marilyn Russell on 5486 2678 or email marilynrussell55@gmail.com

When: Thursday August 27 starting at 7pm

Eine Kleine Nachtmusik is one of Mozart’s best known and most endearing works of chamber music, although it has been slightly neglected and overtaken in popularity in recent times by the more boisterous Four Seasons by Vivaldi.

Organisers of ‘Simply Classical’ position it in the limelight again by making it the theme of their next concert, which will be held on August 28, 2.30pm at St. Patrick’s Church, Gympie.

The ‘Gympie Strings’ will open the concert with the first movement, and play the final Rondo movement as the finishing piece. The parts in the middle, sadly, will have to wait for another concert.

There will be the usual variety of instrumental and vocal items in line with the theme, which is the trademark for the success of these concerts: Romances, love songs, adagios to melt your heart away, etc.

Violinist Alex Pattri will play one of the two Beethoven Romances, and he has chosen the lesser known of the two, which starts with impressive double stops.

Venerable Ronald Webb, ex – principal oboist of the New Zealand Symphony Orchestra, is looking for a suitable repertoire from the classical period.

Lily Dargusch–Haig, Gympie’s champion young pianist, is playing an Impromptu by Schubert, and there will be more Schubert and Beethoven from baritone Daniel Jess.

A trumpeter, Dougal Tollner, (yes, they can be romantic too!) and poetry by Sharon Thompson will round off the concert.

The end of August is nearly spring time, so being a bit romantic is quite permissible.

Hope to see you there, to chat about the concert with a cup of tea or coffee on conclusion.

Art competition with a difference

The inaugural Glenwood Festival of Arts is here!

Come and see this art fair for the whole family. Following the judging, an auction with no commission charged will be held for those who wish to participate.

Enjoy a family fun day which will include a BBQ lunch. Jumping castle, face painting, art and craft stalls, belly dancing, arty stalls and much more on 10am-4pm, August 6 at Glenwood State School. Call 0434 511 910 to find out more.

Performers x and Adrian x wowed at the Pig Day Out