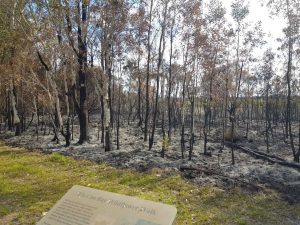 During July the Tin Can Bay area was blanketed in smoke as several hazard reduction burns were conducted in native bushland. Most were DERM areas undertaken by Fireland Consultancy however on Saturday 13, the Wildflower Walk between Emperor St and Oyster Parade was successfully managed by Gympie Regional Council.

This sensitive area was approached with a well executed systematic burn of the two end sections. With limiting environmental impact the focus of the planning, the centre area was retained as natural bushland to enable this year’s bird breeding complemented by Council’s newly installed nesting boxes.

On Wednesday 17 all this hard work went up in smoke as a deliberately lit fire was raging on the pathway side of the centre section and had also jumped across to the foreshore reserve.

Due to the quick actions of attending fire crews, the foreshore reserve was extinguished, removing threat to residential areas. However, the Wildflower Centre block was unable to be stopped.

“My heart is breaking at the loss of all the hard work that was done on Saturday to preserve the area,” expressed Desley.

Fortunately the cool evening conditions only allowed the fire to destroy about half of the remaining bush before burning itself out. To the person who put light to the area – shame, shame, shame!

If anyone sees suspicious activity or sees/smells smoke that is not a part of a supervised controlled burn then contact authorities immediately.