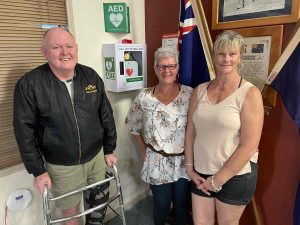 Karl, Lyndall, and Cheryle are proud of the newly installed defibrillators.

Cheryle Koschel and Lyndall Thompson only joined the Tin Can Bay RSL as social members in the past year, but they are already making their presence felt.

They love the RSL facilities but noticed that there were no defibrillators available on the premises, so thought they might be able to solve the problem with the help of the local community. They approached RSL sub-branch Vice President Karl Hempstead who thought it was a great idea.

Upon getting the go ahead, Cheryle and Lyndall got straight into it, designing posters to advertise the project, and then kicking off fundraising. Within two months of the plan being hatched, the RSL is excited to announce that two defibrillators have now been installed, one in the bar area and one in the hall.

The defibrillators cost $4,500 and were funded through donations from local businesses, RSL sub-branch members, and the general community. Major contributors included Mike and Jenny Gray from the Sleepy Lagoon Motel, Peter and Annette Wells – owners of Noosa Tackle World, and the Tin Can Bay Country Club.

A defibrillator can save someone’s life if they have a cardiac arrest. The sooner you use a defibrillator, the greater the chances of survival.

As Karl said, ‘The RSL has an aging demographic. These new defibrillators have the capacity to save a life.’

Cheryle and Lyndall are excited that their idea has been implemented so quickly.

‘We think the RSL does a great job and wanted to do something for the local community. We would hate to have someone need a defibrillator and not have one on hand. We want to thank the local businesses and community for making our fund-raising efforts so easy.’

Well Karl, Lyndall, and Cheryle, we appreciate your efforts. Thank you for your service!