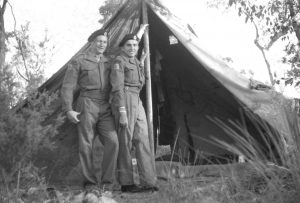 Ian Ross has remembered back before his sand mining days, to his first visit to Rainbow Beach with the Army in 1960.

In January 1959, my name came up in the Birthday ballot and I was inducted into the 11th National Service Army Battalion at Wacol. The intense training only lasted for three months, after which the national servicemen of the day returned to civilian life but were required to undertake continuing training in their spare time at Army camps.

Sometime in early 1960 I was rostered to attend a camp at Tin Can Bay. Lining up for our first parade, our sergeant called for two volunteers to man the water pumping station at Snapper Creek.

There was very little permanent water at the camp and when a large camp moved in, it was necessary to truck fresh water from a waterhole where the Tin Can Bay road crossed Snapper Creek.

It seemed like a refreshing break from the normal training, so I volunteered and set up camp with a colleague at the creek. I guess it was a bit monotonous filling the continuous line of army tankers and adding the required amount of chlorine, but they did look after us with occasional breaks from the routine.

One day an army four-wheel drive truck pulled up that was not a tanker and advised they were on an expedition and map reading exercise to find the back beach, and would one of us like to come. I volunteered and my mate was happy to stay and volunteer for the next outing.

I jumped aboard the four-wheel drive truck and we set off toward Tin Can Bay township. We turned right a little way down the road, (it must have been somewhere near the present turn-off to Cooloola Cove) and proceeded along a very poor sand track.

There was a sign of sorts that mentioned an Aboriginal bora ring but we didn’t go there, instead turning right onto a very poor track on which there were no signs of any recent usage at all.

Not far along the track we encountered a tree across the road. Perhaps this was the time to turn back but no, there were nine of us in the truck and it was no trouble to move the tree aside.

At this point in time we in the back of the truck began to question the driver, was he sure he knew where he was going, a local military map was thrust backwards with some sort of warning if we knew any better we should drive. 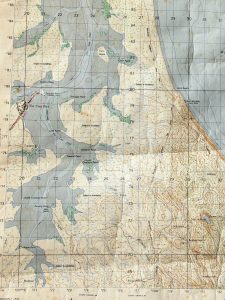 Old 1958 Military Map Wide Bay, the present Rainbow Beach Road is in the same position as the track along the old telephone line from Searys Creek.

I examined the map, it was 1958 vintage, it should be accurate but these tracks were cut by the forestry department and timber getters, the only road the military had ever cut was further south leading to the beach south of double point and that was during World War II.

The tracks improved as we ventured east, there were joining tracks from the west, one of which would have been what we now know as the Cooloola Way. Eventually we reached some civilisation – this was the Forestry Camp known as Camp Milo. There were forestry personnel inside who welcomed us.

We were soon comparing our multi-coloured military map to the pink Forestry maps. They were very similar and to the same scale, but a few more recent tracks were shown on the forestry version.

We shared a cup of morning tea with the forestry boys who explained that we should be drinking Milo, as Les Durrington who manned the station for many years drank nothing else. A vast collection of Milo tins once surrounded the hut, to the point in which the camp was nicknamed Camp Milo and the name had stuck.

We were given directions on how to proceed to the back beach, we needed to take the track leading to Poverty Point for one-and-a-half miles, where we would find an unmarked intersection where we needed to turn right.

This track would take us over a log bridge across Seary’s Creek, and we would then climb a hill where we would intercept the old telephone line that had once serviced the lighthouse at Double Island Point and the signal station at Inskip Point.

Stay on the track under the telephone line and you can’t go wrong they said.

We followed directions implicitly and avoided any inclinations to turn off. A well-used track appeared on our left and a Land Rover emerged from it, more civilisation.

This would be the track from Carlo Creek. We knew there was a jetty there, where locals from Tin Can Bay had stored unregistered jalopies of all kinds to access the back beach.

We found nothing at the back beach except a cleared area to the south (now Phil Rodgers Park) where there were a couple of tents. The track down to the beach was steep but good, no trouble at all to access the beach and rocks, which our map identified as Eight Mile Rocks or Mudlo Rocks in brackets.

We had a look around – the tide was coming in and we opted not to challenge the exposed rocks on the beach. There was a curious hole in one of the rocks which a passing fisherman advised was known as the blow hole because the surf thundered through it at high tide.

A great spot to which I vowed to return someday, but now it was time to return to Tin Can Bay. Our drivers had learnt a lot from map reading and those passengers in the back had enjoyed a good day out.