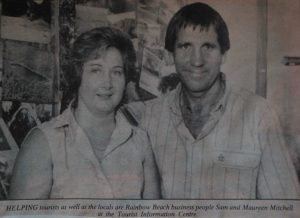 Then (1989): Maureen and Sam Mitchell are proudly 30 years in the one business – Rainbow Beach Tourist and Information Centre, now relocated a few shops down, next to Sea Salt at Rainbow Image courtesy Gympie Times

This interview has been a long time in the making. Thirty years to be exact!

Sam and Maureen Mitchell bought the Tourist and Information Centre and Nautica Resort from Pam and Fred Murray in June 1987 and have since become an integral part of the Rainbow Beach community.

Both Sam and Maureen worked for Jimmy Ott at Surf and Sand Safaris: Sam driving the tour buses to Fraser Island and the Coloured Sands, and Maureen in the shop selling the tours. When the opportunity arose to buy the Murray’s business they jumped at the chance and the rest is history.

Back in the day the shop was pretty much the same as it is now, selling tours, clothing and handing out information about our beautiful area.

“The only difference is we used to sell stubbies; now we sell boardies,” laughs Maureen.

The most asked question over the years? 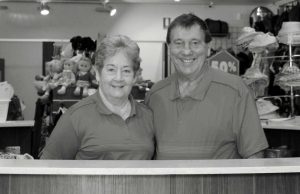 “Definitely ‘How are the Rocks at the moment’,” answers Maureen.

“I am coming up on Saturday how will the Rocks be then?” says Sam “You need a crystal ball sometimes.”

“Life is still pretty much as it was 30 years ago, the pace was slower and much less beach traffic,” Maureen adds

What was the biggest tourist attraction?

“The Coloured Sands tour was very popular, we used to take up to 100 people a day up to the coloured sands, lighthouse and of course the Cherry Venture,” says Sam.

“The Yummy Van at the Cherry Venture was also a big draw card!” adds Maureen.

The tours to Fraser Island were also a favourite, costing about $30 per person, “But we only went to Lake McKenzie, we didn’t do the beach run back then.=,” says Sam. “I used do a buffet lunch from the back of the Toyota, people loved it.”

After 30 years in the same shop how does it feel to be in a new place?

Sam and Maureen both agree, “It is strange after being so long down the road, it was hard to leave, but it is a good thing. We are closer to the beach, and when we extend into the shop next door we will have much more space. It has been a positive move really.”

The ‘Info Shop’ has always been a tourist attraction in itself with people that came in 30 years ago now bringing their grandkids in.

As one long-term customer commented the other day, “If this shop closes Rainbow just won’t be the same…it has been a big part of my holiday and childhood memories.”

Hopefully there are many more memories to be made.