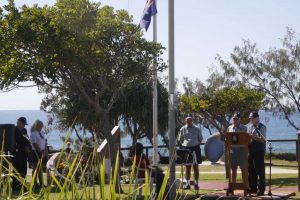 The Sub Branch will conduct a memorial service on Vietnam Veterans Day, Thursday August 18, commencing at 1100 hours at the Cenotaph, all are welcome to attend.

This year marks the 50th anniversary of a very significant battle of the Vietnam Campaign, the Battle of Long Tan conducted in monsoonal conditions in the rubber trees near the Nui Dat Task Force Base.

Special mention will be made at the service to those who took part in that battle on this much publicised anniversary throughout Australia.

Come along on the 18th to acknowledge/discover another chapter in Australia’s military history from 1962-1975 in South Vietnam, during which over 500 made the supreme sacrifice for this nation.