Across the coast, numbers were up this year for the national clean up, and over 180 large rubbish bags were filled around Rainbow Beach alone!

There was a strong turnout with 58 people officially registering – either online or signing up on the day – although it seemed many more were out and about with bags, gloves, utes and trailers – doing their bit to keep the Cooloola Coast clean.

Plenty of plastic filled the bags again, but the most unusual item picked up was a full sized fridge/freezer from Teewah Beach.

A surf club team took care of the town beach, as well as Lawrie Hanson and Phil Rogers Parks. The Clubbies also helped with the free BBQ afterwards.

The Cooloola 4WD Club picked up along Freshwater Road again, while groups of campers and QPWS rangers helped out at Inskip and along Teewah Beach.

Many of the Cooloola Cove Residents and Friends Inc helped (with an average age of 65), and reported much less rubbish than last year.

Over in Tin Can Bay, supervisor Derek Andrews and another Tin Can Bay Fishing Club member, Ron Cox, signed people up, giving them bags and a talk on their own safety whilst doing the clean up.

Toni Andrews from Tin Can Bay Fishing Club said, “We had a tremendous roll-up with 47 participants, including the TCB Crocs, Lions and Lionesses and public.  All-in-all 16 bags of rubbish and recyclables were collected; so the esplanade has had a big tidy up from Norman Point through to Crab Creek.

“The Coast Guard did the water’s edge, along with around 500 metres at the mouth of Snapper Creek – a job well done.”

At the finish, BBQs were offered to participants across the coast and even free face painting for the little Tin Can Bay registrants.

The Schools Clean Up Day was also productive, with both Tin Can Bay and Rainbow Beach participating. Organisers Chappy Ronnie said Ranger Grant Phelan talked with the Rainbow Beach students about the importance of looking after our environment.

Rainbow Beach SS Principal Michael Grogran said, “It was a very successful day with all of the students doing a great job collecting rubbish from in and around the school. As usual we found everything from cigarette butts and loose paper to an entire mattress!”

Grant Phelan from National Parks reminded us, “Even though every day can be Clean Up Australia Day we look forward to seeing you there for the 2017 event.” 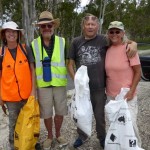 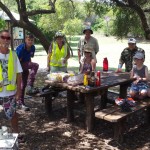 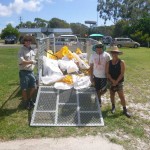 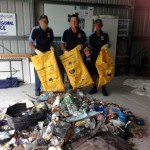 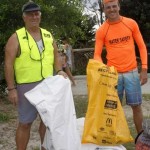