On November 24th 2013, trail/beach runs were held by TRAQ at the beautiful Rainbow Beach.

All races started and finished at the Rainbow Beach pool.

The Rainbow Beach Sports and Social club was our host for the registration night. Most runners arrived the day before and enjoyed a meal at the club that night.

Conditions on the day were very warm and humid. In spite of this many runners were very pleased with the course judging by the comments after finishing.

43km runners started with a short loop over the Carlo Sandblow and back to the pool, before heading up the beach to Double Island lighthouse. Runners did the trek up to the lighthouse then down the other side to Teewah beach. They then ran down to the Leisha Tack before turning around and going back the way they came. (yes, up to the lighthouse again!) They returned to the finished along the Telegraph Track.

The 25km run started at the pool and headed along Rainbow Beach as far as the Leisha Track. Runners then returned to the pool via the Telegraph Track.

The 11km race saw runners head over the Blow, then out along the Telegraph Track to where it meets Freshwater road. Runners then returned to the finish.

The pool proves to be an excellent venue and is a great asset for the town.

Our thanks again to Mark and Donna and their teams, Rainbow Beach and Tin Can Bay SES squads who provided the course marshalling and manned the checkpoints.

Thanks also to Rick and the Club who donated a perpetual trophy along with all the other assistance they gave.

A huge thanks to Ian Javes and TRAQ. They are the driving force behind this, and other runs in and around S.E. Queensland.

Ann Raftery also assisted greatly with the pre-planning and was tireless over the weekend with registrations and timekeeping ably assisted by her daughter Lauren.

TRAQ was also assisted to get this event off the ground by the QPWS who assisted with the permits.

Finally I would like to thank the runners. Without them there would be no event. The runs next year will be on November 16th and we are already planning!

Featured image – Kate Sanderson is all smiles – almost to the finish line after 25km! 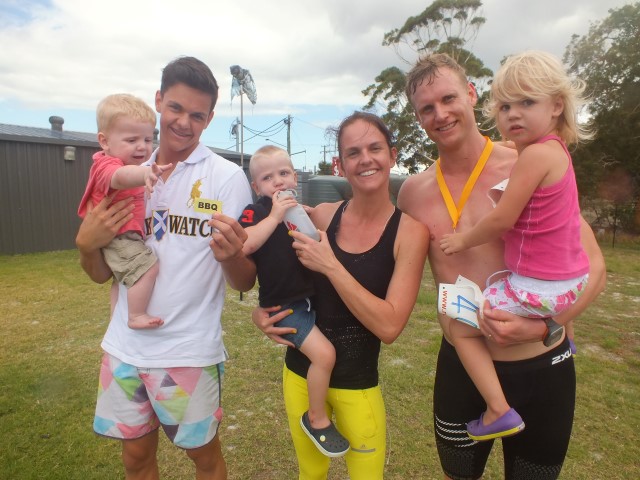 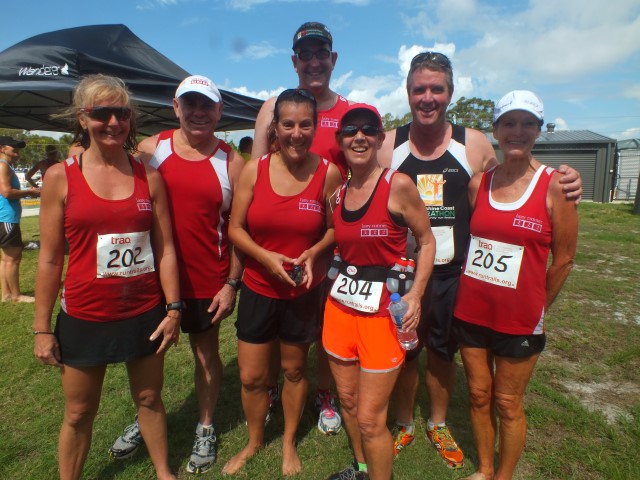 Some “Lazy Runners” from the Sunny Coast, the Kieser family, Emmett, Josh, Dante and Alexis greet parents Sharny and Julius after they completed the 11km and 45km runs and many more photos  in the Rainbow Beach Trail Run Album on the Rainbow Beach Cooloola Coast Community News facebook page.