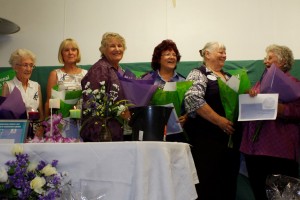 The RSL Hall was full to the brim when the Lioness Club of Tin Can Bay hosted “International Women’s Day” last month.

The Club decided to hold this event to not only honour the women of our community but also to honour the women who serve in the defence forces. Camp Kerr personnel also attended and celebrated the theme, “Women in the Defence Forces”.

There were displays of displays of memorabilia of Camp Kerr and uniforms, music, raffles and guest speakers. The Lionesses drew many compliments for their superb morning tea and lunch.

Secretary Jill Press says, “It is the first time our club hosted this day and we are hoping to make it an annual event  to show case and honour the women of our community.”

There were six excellent nominees for “The Woman of Achievement”. After long deliberation, the judges awarded a beautiful engraved glass vase (sponsored by Rainbow Beach Cooloola Coast Community y News) to Pam Leslie for her dedicated years of community service. Pam provided stories from her time in the Women’s Auxiliary Airforce, after joining in 1940  after she left school.

Other nominees were applauded for their roles in the community: 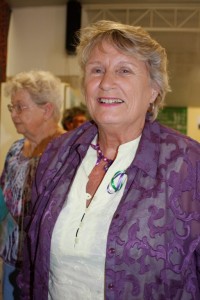 Cherryl is a competent and respected Member of QCWA and a former Member of The Australian Defence Force (ADF). Cherryl has brought a level of dedication to QCWA that is in no small part a legacy of her dedication to her former role as a Woman in Defence.

In her role, Cherryl is involved with community work and projects that QCWA engages in as a registered charity. Within a short time Cherryl was elected as a Branch Vice-President, and the following year added to her portfolio by taking on the role of Publicity Officer.

Desley  joined the SES and then after a few years joined the Qld Fire Service at TCB as an Auxiliary Fire Fighter in TCB. Being the first female in the TCB Fire Service Desley fought and after 7 years become a LT, then in 2000 become the Captain of TCB Fire Station. Desley is a Trainer in Qld Fire and Emergency Services she teaches QAS First Aid and Advanced Resuscitation to both permanent and auxiliary fire-fighters in North Coast Region.  Desley is also the Tin Can Bay and Cooloola Cove Fire Warden. Desley fought hard and after 12 Years got a new fire station for Tin Can Bay. 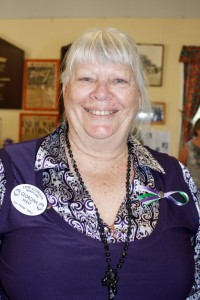 Georgina has been President of the Pensioners League TCB,  4 Wheel Club secretary and Lioness secretary. With 10 years working at the Gympie R.S.P.C.A bargain barn, most in the manager role, Georgina says, “I have tried to retire for the last four years but something always comes up and I am back again! A running joke with all my friends.

“I am now a lion and have been for the last 4 years and love it very much am secretary of Rainbow Beach Lions and Lionhunter editor. We work at the Gympie show and the Gympie muster…it is hard work but very rewarding. We also do the gunfire breakfast for the R.S.L. every year which I really love to do once Ian can get me out of bed! I don’t do mornings!” 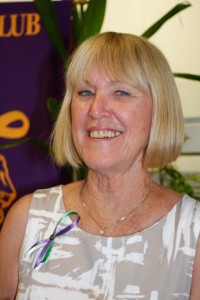 A resident of Rainbow Beach for 14 years, Peggy is a tireless worker for the community. Recipient of the Local Hero Award 2012 for the Cooloola Coast, she has been involved with the Community Information Centre, and started Medical Meals in 2008 to support local people who needed meals after returning from long days involving medical tests and treatment.

The organiser of the very successful “Brushes By The Sea” Art Festival held on the Australia Day long weekend, of which the profits  support local charities. Peggy previously spent time on the Ambulance Committee fundraising for equipment and was the photographer for the popular Cancer Survival Calendar where 12 cancer survivors posed to raised funds for breast cancer.

Geologist Roma Ravn, battled isolation, explosives, trucks and chauvinism working 27 years across the country for the Department of Mines. Her training in medicine  and thirst for knowledge has led to further studies and lots of diplomas in topics as diverse as Herbal Medicine and Anthropology.

Roma belongs to Toastmasters, Probus, the UFO Club, Gympie Philosophy Exchange and is working on a biography (not her own!).

The Tin Can Bay Lionesses thank the community for their continued support to help raise funds and also the support shown to all of the Community Clubs on the Cooloola Coast.   For further information about Lionesses, please contact t Jill Press on 5486 2843 or Jill Falzon on 5486 4852. (This article was complied thanks to nominees and information provided by Lionesses.) 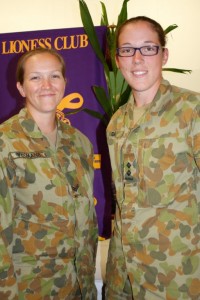 The impact on families and strength of women, sharing loved ones to defend our country was also brought home at the Lioness’s International Women’s Day event, and is particularly relevant as we approach ANZAC Day.  One of the invited guests, Ricki Shepperson brought many tears to eyes with her speech as a Mum:

As a Mum of a Defence personnel there are many mixed emotions, these began from the moment Teagan indicated she was joining the Defence Force. But the emotion  you feel the most is PRIDE.

A couple of moments I will share:
After accompanying Teagan through all the recruitment process I attended the ceremony where you realise this is the future for your daughter as she stands and takes her Pledge of Allegiance.  It is at this moment that you begin the journey of Defence life.  You are there to see her board the plane alone, headed for recruitment training in another state.

You have no contact, you are always wondering how is she coping, does she like it, and many more thoughts, then a 3 minute phone call, “Mum, I want to come home”, you reassure her she can do it, end of call until who knows when the next one will be. Finally day of passing out, and you are there to see this young lady parade with much precision and pride. She has made it and in those few months this quiet, shy girl has grown in many ways and continues to grow with confidence.

A remark Teagan made on our way home was,” Anyone who leaves school and cannot find a job should join the forces, they will soon realise they are worthy of something.”

Another moment was when Teagan was on training exercise at Camp Kerr, so close to home but you could not see her nor phone her. Then you receive a phone message, “going  through Gympie soon”. You leave work and sit at the corner just to get a glimpse and a wave as she passes by.  You say to yourself, She is okay.

As a Mum you tell your children you know everything, well believe me you don’t. I volunteered to iron her uniform one day and well I had instructions continually being given, don’t put a crease here or there, don’t, don’t , don’t! Gosh, I was pleased when I was finished and thanks to a can of crisp this uniform was ironed with such perfection and care.

Defence is a family, you don’t lose a child to Defence you gain a family. You experience this when attending events or just visiting. You share the laughs, the tears and also the smell when they return from days of field training. You are on call just like they are. You housesit and babysit when they have duty or are away.

But most of all you are their MUM.