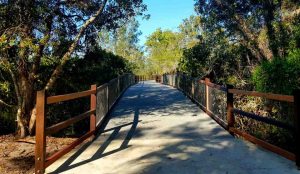 The original Nola Bale bridge was built 25 years ago and due to deterioration and safety concerns, the reconstruction of the bridge was put out to tender.

The funding was approved in 2017, the tender was awarded in April 2020 and the bridge is now complete with a dedication ceremony planned to mark the opening.

Nola Bale was actively involved in the community and the Nola Bale Bridge was built in recognition of this work.

She was instrumental in an ambulance service being established in Tin Can Bay and a pioneer of the arts which included theatre restaurants, music, art, dancing, fashion and social groups.

Her daughter, Kerry Bale, who used to produce the local magazine Tuncunba is back living in the family home and said:

“A young local boy suffered an asthma attack and there was only one oxygen tank in town. There was a new policeman, a new manager at the fish board and no-one knew anything about the tank and that is the reason she got the ambulance built.

“Mum also helped a lot of people which nobody knew about, including driving people to medical appointments before there was a Medical Transport Service.”

In 1990, the Lions Club built a house on the foreshore of Tin Can Bay so children could have a holiday by the sea water and they named it Cathy House, after Bernie and Nola’s daughter Cathy, who passed away due to Cystic Fibrosis.