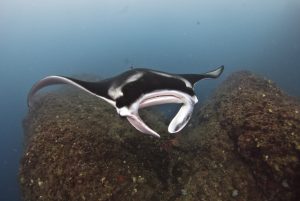 Nothing reminds us more of winter out at Wolf Rock than a stiff Westerly straight off the sandblow and the wonderful pleasure of getting to swim with Manta Rays.

Manta Rays are the largest species of ray and are found throughout the world with distributions in Australia reaching north of Shark Bay in Western Australia to central NSW in Eastern Australia.

Of the two known species, Manta Alfredi (the reef manta) is the one to frequent Wolf Rock during the colder months. Long considered harmless giants of the ocean they can grow to 5.5m across and feed primarily on zooplankton filtered out of the ocean through their large, forward facing mouths.

While little is known about the life cycle and habits of the Manta Ray, they do live a largely pelagic life, migrating from place to place along the coast and use ocean pinnacles and mounts to ‘clean’ parasites off themselves with the aid of small fish, such as wrasse.

Wolf Rock can be a cleaning station stop-off for multitudes of Mantas at any given point and we regularly see groups of five or more gliding about the underwater pinnacles. Whilst considered vulnerable under the IUCN due to fishing pressures and entanglement issues, research continues into the life cycle and connectivity of reef manta populations in Australia.

Project Manta is a multidisciplinary collaboration developed by the University of Queensland to investigate the migratory nature of these majestic fish, and in doing so gather accurate data on population size and dynamics and assist in providing comprehensive management recommendations for the future of the species.

Wolf Rock Dive works closely with Project Manta by providing ID shots of each individual we encounter at the rock. These ID shots (photographs of the unique underside pattern of the ray) help identify the movement of particular individuals throughout the region. Just last week, we had an encounter with ‘Frosty’, a manta that we hadn’t seen in over a year!

If you would like to enjoy these gentle giants yourself or want a hand in finding a new unidentified Manta Ray give us a call on 5486 8004.