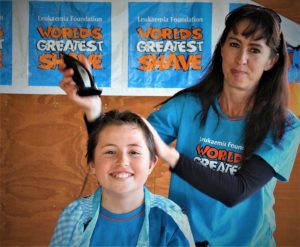 Mum Kirstie was the only one trusted to shave daughter Ella’s hair for the World’s Greatest Shave, raising money for blood cancer

Ella Jordison, is 11 and is certainly a hero. She took the plunge and joined the World’s Greatest Shave, and her mum Kirstie was entrusted with the clippers.

The shave was held during parade at the Rainbow Beach School and Ella’s friends each cut off one plait – even Ella’s brother was allowed to snip one.

Ella chose to participate in the event as her mum’s close friend has been diagnosed with a blood cancer and Ella wanted to help.

Waimaria Te Tai (Mardia for short) is a young mother of three who has been living in Rainbow Beach for four years.

Mardia was diagnosed with kidney cancer in 2018 and was booked in for surgery when they discovered she had blood cancer.

They had to cancel the treatment and Mardia has been having chemotherapy on the Sunshine Coast for 10 weeks.

She said: “I am having a spell at the moment to strengthen my immune system and become strong again.

“My three children Arliyah-Grace, AJ and Xzavia who are 3,5 and 6 years old give me the drive to fight this.”

By fundraising for the World’s Greatest Shave, Ella felt she could help Mardia and would love to reach her goal of $2000.

If you pop onto to worldsgreatestshave.com, click the donate button and pop in the name Ella Jordison – as they say, every cent counts.

Well done Ella and all the very best with your treatment Mardia. x