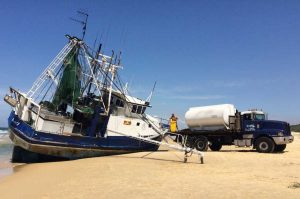 In what could have been another Maheno wreck, last month a local family were devastated to hear their trawler, The Reward II was aground on Fraser Island.

The Reibel family from Tin Can Bay had just invested significant dollars for new engines and equipment for both trawlers.

Scott Reibel was not on his boat, The Reward II, but had decided to skipper Wandering Star, to ensure there were no issues with the new engine. Father and son were expecting a night out that Saturday October 16, at the Seafood Festival Charity Dinner, organised by Scott’s wife Rebecca. Instead, early morning, Scott had to tell his dad, Kevin, that the boat was aground.

Kevin followed procedure, contacting the relevant authorities as they drove up to One Tree Rocks.

“Police rang back to say they had located the vessel. Peter Street and I got the dinghy out to Scott and him ashore from the Wandering Star.”

Newspapers and social media reported the 26-year-old skipper was missing, he was located later that day.

Advised by the insurance assessor to refloat on high tide, Scott’s friend Brett Beauclerc delivered tow ropes. With a lot of help from onlookers and crew, the Wandering Star and McAndrew Fisheries’ Kimissa Lee made the attempt. Although the 16.63m boat did move, the tow ropes eventually broke.

Sunday, under direction of the insurance assessor and supervised by Marine Safety Queensland, another attempt was made on high tide.

“Unfortunately, the tow ropes again broke after some movement was made. The boat then rolled onto her port side due to heavy seas and high winds. The wheelhouse windows smashed and the vessel partially filled with sand and flooding sea water into the galley, wheelhouse, freezer room and engine room.”

Directed to remain by the insurance assessor, Kevin said, “Peter’s wife Anita remained on the island and single-handedly set up camp and cooked meals for eight men!”

Monday, the insurance assessor advised to call in Rainbow Recovery.

“Dean and Wayne Hayes and Dan McCormack were unbelievable the way they worked there that night. While the machinery was on one side of the vessel – every able-bodied person was working on the other side with shovels to remove as much sand from the deck of the vessel as possible.” 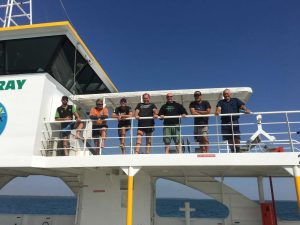 Two dyneema tow ropes, each 80 metres long with 40 tonne breaking capacity were attached to two Rainbow Recovery vehicles pulling on one side, with an excavator pushing on one side. By daylight the vessel was standing on an even keel.

Insurance had sent a tug from Brisbane. With the help of the Sea Force, The Reward II was successfully refloated Tuesday 8.30pm in front of almost 1000 tourists.

After such a traumatic time, Kevin has a lot of people to thank: Shane the local police officer on Fraser Island and the two Hervey Bay officers provided food, assistance, support, equipment; McAndrew Fisheries, NPWS, MSQ officers, Joel from Hampidjan Australia, Eurong Resort staff, Kosta from Manta Ray barge, Rainbow Recovery (without you, we would be in a completely different place) and Chris Rooks with the after-recovery process.

“I thank our crew, Brett Wilkes and Nicholas Marsh, for going above and beyond their position descriptions, and friends, Peter and Anita Street, Brett Beauclerc, David Crowe, Dan Street, Troy Sismey and their families.

“Personally, I would like to thank my son, Scott, who coordinated the entire recovery, my daughter in law Rebecca and wife Kathy for all of their support and as we continue come to grips with the situation.”

Said Kevin, “Our family love the Island. No one was hurt. No oil, no fuel, no pollution was spilled, I am relieved that all we left on Fraser Island was our footprints.”

The Reward II was towed to Bundaberg where assessments and repairs will be carried out, unfortunately it is only the start of the story.

Thanks Rainbow Recovery, Anita Street and Reibel family for images. 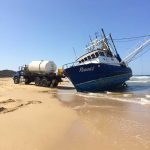 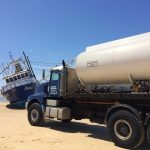 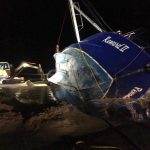 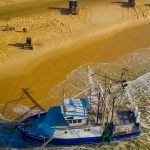 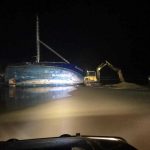 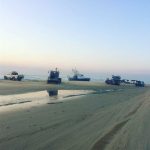 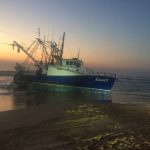