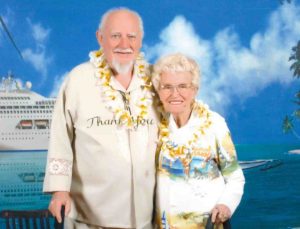 Two of Tin Can Bay’s pioneers, Ned and Kate Kelly on one of the many cruises they both enjoyed

Everybody who lived in the Gympie Region in the ‘70s and ‘80s remembers Ned and Kate Kelly as a flamboyant couple with luxurious vehicles.

They also remember all the work and passion the couple employed to get things done in Tin Can Bay particularly, and Kate’s beautiful photos for the Gympie Times.

Kate was also an exceptional record keeper according to Kerry Bale, and the Kate Kelly Walkway which runs from Norman Point to Crab Creek is in her honour.

Here is an extract from an article written by Malcolm Campbell which was published in the History of Tin Can Bay facebook page.

In their 70 years together, Kate and Alan ‘Ned’ Kelly sailed with P&O here and in the UK on more than one hundred cruises and loved them all. And our onboard teams loved Kate and Ned in return.

When Kate sadly passed away recently in her 90th year leaving Ned grief stricken, the notice for the celebration of her life listed P&O as one of her homes.

Photos on the wall of their unit tell the story of their cruise adventures together. “We enjoyed our cruises very much,” Ned said. “We did 80 to 90 cruises with P&O in Australia and the others with P&O in the UK.

“We did some of the trips in England early on and we have always been loyal to P&O because my father had worked on their ships in the UK. The P&O ships have been our second home and we enjoyed it so much. The crew often told us that we were part of the family.”

Ned is doing his best to get on with life but concedes he is not doing well without his darling Kate by his side. We sent Ned some flowers to honour Kate and to thank them both for their devotion to P&O. Ned asked if one day he might be able to cruise again. “You have to have a dream,” he said.

“Thank you Kate and Ned.”

According to historian Shirley Wilson, she was indeed a lady first and foremost and always dressed with style and performed her duties as a councillor’s wife with absolute dignity.

Rest in peace Kate and thank you.