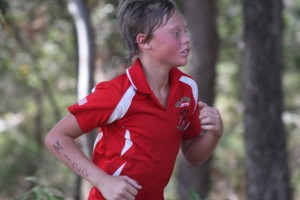 The much-loved Cooloola Triathlon is one of the biggest events in the school sporting calendar, with about 350 competitors from as far away as Kilkivan arriving at Norman Point to swim, ride and/or run.

Meticulously planned each year – the dedicated team of teachers were very grateful to police, SES, sausage sizzlers John and Sue, and parents for bringing their children along. About $350 was raised for recent Gympie tragedies on the day.

In the 12 and Under Individual Triathlon kids swim 175m, cycle 7km and run 2km, and Hugh Gilmore (2nd) was closely followed by Talyn (3rd) and Alex (6th). Congratulations to Mikala Daniels who was the only student from Tin Can Bay School to compete in the Individual Triathlon.

The 19 and Under Triathlon includes a gruelling 425m swim, 14km cycle and 4km run. Paige Reibel finished her last school triathlon with a win!

In the 12 and Under team events, Go for Gold (Caleb, Oliver, Taj) won 5th place and Winners are Winners (Lachlan, Blake and Jaden) came in 10th for the male division for Tin Can Bay School. The Fit Chicks, Rainbow’s Ruby and Emma, were 13th in the female division for 12 and Under, even though Emma paused to help a friend! Winners & Losers, Georgia, Paige and Amber from Tin Can Bay School, followed in 15th place.

In the 16 and Under, Maddy Reibel and Natasha Lee won 3rd place in the female teams.

In the 19 and Under, Remy Hethorn’s team from St. Pats came in 2nd place for the female division.

Congratulations to all, hope to see more coastal families there next year!