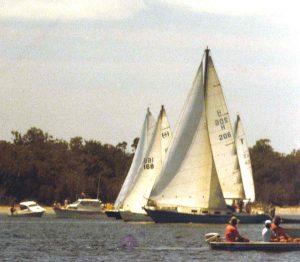 The Tin Can Bay Yacht Club will have a busy week at the end of April with the Cooloola Cup on 23 and 24 April, followed by the Bay to Bay regatta the following weekend, 30 April and 1 May.

The Cooloola Cup is sponsored by Century 21, The TCB Chandlery, and Sails Bar and Bistro and it is hoped that it will attract even more boats than last year.

The sought after prize for the Cooloola Cup for a monohull is not the first prize but the second which is barrel of port sponsored by John Moffatt, a local pharmacist.

The Bay to Bay is a trailable yacht classic which started in 1980, missing out in 2020 thanks to Covid 19. The Hervey Bay Sailing Club run the race and Tin Can Bay hosts the start in the TCB inlet.

The race start is a spectacular sight for the inlet with so many boats in different divisions plying for a position on the start line.

Unfortunately, the weather has not been too favourable of late and a couple of Sunday race days have been postponed. The Wednesday afternoon cruises have also been affected however here’s hoping for better sailing weather soon.

Anyone wishing to cruise in company is welcome on a Wednesday. Meet at the Yacht Club at 1pm ready to rig and go sailing.