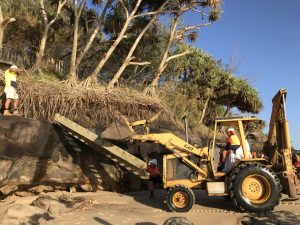 Council clearing out the steps from below Phil Rogers Park

No, not those stairs….the stairs at the bottom of Phil Rogers Park.

Thanks to the eagle eyes of some trusty locals, Cherie Mason and Sue Fitzgerald, we have photos to show the council removing the stairs earlier in the month.

A spokesperson from the Gympie Regional Council said:

“Providing beach access stairs at the southern end of Phil Rogers Park has been attempted over the last twenty years with the most recent closed for safety reasons since early 2016 and, due to the instability of the rock footings and wave impact, the decision was made to not reinstate them.

“A demolition crew is now in the process of removing the existing fibre composite stairs and the remaining sections of the previous timber platform. Council will be planting native plant species in the areas after the removal occurs.

“The viewing platform was entirely funded by the Queensland Government and provides an opportunity for residents and visitors to take in the beautiful Coloured Sands.”