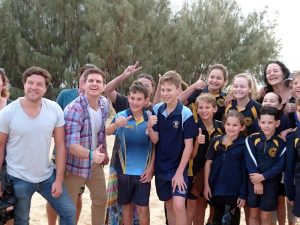 Sam Mac was swamped with locals keen to show how friendly Rainbow Beach is! Images by Barb Rees

Sam Mac from Channel 7 arrived to watch the dawn over the mini-blow and sample some of the fun activities Rainbow Beach offers, thanks to Visit Sunshine Coast and Destination Gympie Region.

Sam tasted local produce, experienced beach driving then a hilarious hand-holding chat to local Andrew McCarthy whilst riding a horse. Straight from the Muster, Mike McClellan was able to finish it all with a song and dance.

Peter Hook, VSC Media Representative in Sydney said, “Andrew and team, that was awesome. Spectacular. And, wow, did it show off Rainbow Beach at its best.

“Even the Sunrise crew in Sydney commented how fantastic all the experiences were, so a massive thanks to you guys.”

He was impressed with the crowds, so thanks to all who came along, “I can see strawberry sales spiking and everyone rushing to ride horses into the water. It just looked brilliant.”

Andrew Saunders said they arrived the afternoon before, “They were making their way south to Mooloolaba and needed to fill the Thursday. I got a phone call at 7am Sunday morning while in my tent at the Muster from Peter asking for me to put together a production brief for consideration. I put together the brief and they liked it.

“I took them around to see the proposed locations before they had a relaxing meal of local produce in their apartment at Rainbow Ocean Palms.”

Jacqueline Soden from Rainbow Beach Horse Rides also thanked the teams from VSR and DGR; she was, “Delighted to feed back that my phone has been buzzing all morning and just booked in a guest who called from NSW, has never ridden a horse on the beach before and they are going to fly up!”

That was great to hear – to all involved, as Peter said, “You did Rainbow Beach proud!”