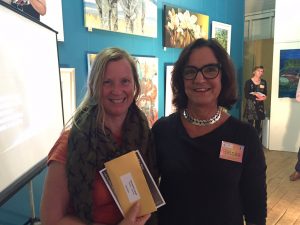 Winning the committee’s encouragement award years ago, Lisa went on to collect last year’s Bendigo Bank Open Prize with her popular painting of elephants called “Emotions”.   She is now preparing to enter the 2017 art festival with a new artwork.

The festival kicks off with a gala opening night on Thursday June 29 at the Imbil Public Hall, Edward Street, continuing until Sunday July 2, and its supporters say Lisa’s story is not an unusual one.

The festival is an annual event run by Mary Valley Artslink, and president Heinke Butt is proud to say many local and South-East Queensland amateur artists have gone on to bigger things after gaining peer recognition at the festival.

The professional benefits of this grassroots affair are matched by the economic spin-off; not only does the festival attract entries from throughout South-East Queensland, it also draws sponsorship from local business, who gain exposure to wider markets as a result.
Mary Valley Chamber of Commerce this year sponsors a $1000 prize for the new Heritage Art section to celebrate the region’s G150 year – the 150th anniversary of the founding date of the Gympie township.

Local realtor Ron Jeffery has increased sponsorship of the Landscape section, and Bendigo Bank’s Gympie and District Community Bank has also added more dollars to the Open Award this year, offering $2500. One of the State’s biggest demolition companies has also thrown in sponsorship this year – Thunderbird Demolitions has given $500 for the people’s choice award.

At a social level, the art festival continues to hold its place as one of the key cultural events on the Mary Valley calendar.
Ms Butt said the opening night was a great opportunity to catch up with friends and neighbours, and recognise the wealth of creative people living in the region.

Over the course of the weekend, these conversations, prompted by the artwork, are continued between artists, volunteers, residents of the Gympie region and visitors from further afield.

“The Arts builds community identity and pride and adds to norms, such as diversity, tolerance and free expression,” Ms Butt said. “The festival brings people together who might not otherwise come into contact with each other – creating a wonderfully relaxing forum for networking.”

If you are an artist and wish to be involved, there is still time to enter, with forms available through the usual outlets and online at www.maryvalleyartslink.com.au Entries close on June 15.

Phone 0409 382868 to find out more or email info@maryvalleyartfestival.com.au