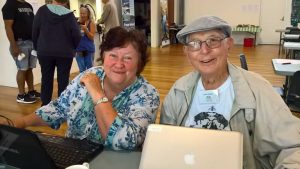 After the exciting discovery of 37 new species of spider and a new moth at the 2018 Cooloola BioBlitz last year, Cooloola Coastcare and Fraser Island Defenders Organisation are planning another BioBlitz on the weekend of 17, 18 and 19 May 2019.

Several scientists and volunteers are already planning to be here from as far away as Melbourne.

However, the BioBlitz is also an event for local Cooloola Coast nature lovers as well. You can come for the weekend or just a day on either Saturday or Sunday, if you want to participate in the field work learning about the biodiversity of the area with the guidance of expert mentors.

Experience the thrill of delving into the natural world as a Citizen Scientist, no previous experience necessary. You’ll be helping catalogue all the species of plants and animals in our region.

On Friday and Saturday evening there will be free presentations by the scientists about the natural history of Cooloola Coast, so feel free to come in the evenings.

For those into the arts, this year there will be art workshops inspired by nature as well. All the details can be found on the Coastcare BioBlitz website over the coming weeks. Mark your calendar now and don’t miss it!

Many more species of moths were discovered during a mini BioBlitz of Cooloola’s four Boronia species by Prof. Doug Hilton last October.

Prof Doug Hilton AO is one of Australia’s leading medical researchers who has a private passion for studying insects, with a special interest in the tiny moths that pollinate Boronias in the Heliozelidae group.

His trip to Queensland was the result of learning about the new moth discovered, Boronia rosmarinifolia, during the August Cooloola BioBlitz.

Prof Hilton said that he expects that some of the specimens he has collected will be new to science, when he has had the opportunity to examine these in more detail back in his Melbourne laboratory.

He said that his Cooloola research is part of an on-going project to unravel many of the complex interactions between these tiny insects and the Boronias, that include many threatened and endangered species, and he is committed to returning to Cooloola next May with a larger team to continue his project.

During his visit to Rainbow Beach, Professor Hilton presented a fascinating talk on his study of the pollination of Boronias that has taken him to every Australian state, with a special focus on Western Australia which has the greatest diversity of species, and also a long history of studying the moths adapted to each species.

This public presentation formed part of the Gympie Regional STEM Hub’s Science in the Pubs, Halls and Cafes program, sponsored by Inspiring Australia.

While he was in Rainbow Beach, Professor Hilton donated a valuable microscope to Cooloola Coastcare to facilitate the work of Citizen Scientists who want to assist his continuing project by undertaking field observations of the Boronias and any insect activity associated with them.