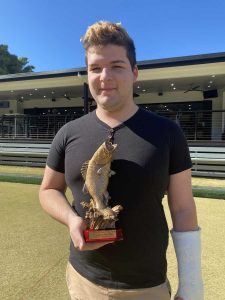 Liam Brady holds the photo named for his father, Peter

As everyone would be aware the Fishing Classic sadly had to be cancelled, it was not an easy decision but with competitors coming from so far away and the ongoing uncertainty it was the only choice to be made.

The good news is that our sponsors have already jumped back on board for next year and we will be back hopefully bigger and better than ever!  We thank them and our participants for their ongoing support.

Grab your calendars and block out Saturday 21 August to Sunday 27 August 2022 for next year’s event.

We will be raffling off what would have been the major drawdown prize for the 2021 comp: a Makocraft 376 Topper Tracker Boat fitted with drop in floor, two rod holders, smooth water safety gear for three people, fitted with aTohatsu Long Shaft 8hp 4 stroke outboard and accompanied by a Dunbier 4m Nipper Trailer with 13” wheels.

Every year at the Fishing Classic, along with the usual end-of-week category winners, we also give out two very special trophies.

One is called the Milton Modin trophy after the husband of Fishing Classic founder Ruth Modin and these trophies are given to the four adults that caught the heaviest of each Reef Fish for the week, plus their names and year they caught said fish are added to a perpetual medal shield.

The other trophy is called the Peter Brady trophy, this trophy is for the Best & Fairest young Fisherman and is awarded to a cadet.  This trophy has been presented to a cadet fisher-person since its inception in 2008.

Peter had two children, Liam and Gemma.  This year Liam was in town so was asked to present the trophy to the worthy cadet.  Liam had never been asked to present this trophy and was excited to do this but then of course the event was cancelled.

However, Liam did pop down to the Sports Club to view the trophy bearing his dad’s name and kindly posed for a photo.

The countdown is now on for the 2022 Rainbow Beach Family Fishing Classic, we are already looking forward to it and hope to see you all there.