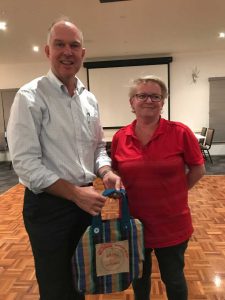 Shadow Minister for Agriculture, Fisheries and Forestry MP Tony Perrett attended the last Rainbow Beach Commerce and Tourism meeting where he acknowledged, in between the peaks in business growth, there are challenges for local business.

Tony Stewart regularly updates various ministers regarding concerns on road issues in this area, including overtaking lanes/lay-way. A road auditor identified two possible locations for a lay-way, one near Silky Oak Tea Gardens and another near the entrance to Laminex.

Members identified road areas of concern at Ross Creek as well as water sitting in tracks on the road between Cooloola Cove turn-off and Rainbow Beach.

Our MP Tony Perrett identified Coondoo Creek Bridge as the number one project across the region.

“If they are going to fix it, then raise it! If we’d been elected it would have been underway – it needs to be lifted three metres.

“There have been deaths at this bridge, access is such an issue, especially for emergency services and schools,” he said.

Tourism Germany TEQ only wanted to visit Rainbow Beach and Noosa for their Sunshine Coast famil. Rainbow Beach is one of the hottest things in Germany – so the future is bright even though May was quiet!

Members were urged to buy tickets for the Kids Bush to Beach Gala dinner on July 14 and help fundraise for Tristan with barefoot bowls on July 15.