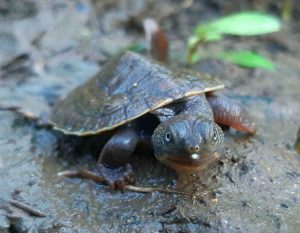 One of the hatchlings from the Mary River clutch. Photo credit (contributed).

Gympie Regional Council Environment and Lands Protection officers, together with the Mary River Catchment Coordinating Committee assisted Tiaro & District Landcare in the discovery and monitoring of the first recorded nest site of the endangered Mary River Turtle (also famously known as the “bum” breathing or green haired turtle) on a stretch of the Mary River previously thought to be out of their reach, close to Gympie.

On average, females take 25 years to reach adulthood. Males take a little longer; closer to 30 years before they reach maturity.

The nest site was monitored and protected for a period of 21 days before evidence of nest disturbance (by a dog) and impending rising water levels proved too risky to the clutch’s survival.

With permission from the State Government, the clutch of eggs was exhumed and transferred to an approved enclosure managed by Tiaro Landcare, which allowed the eggs the best chance of surviving through their incubation.

On average, the 17 tiny MRT hatchlings weighed in at a miniscule 6.43g (roughly the weight of a teaspoon of sugar).

The happy, healthy clutch of aquatic reptiles were released back into their native habitat.