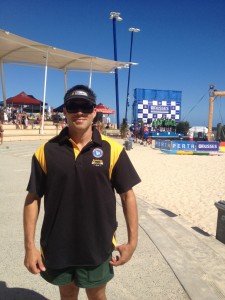 Rainbow Lifesaver, Tumaka Read travelled to Perth to compete in the Australian Titles

Lifesaver, 36 year old Tumaka Read has achieved 4th in the flags and 5th in the beach sprints in the Australian Surf Lifesaving Titles.

RBSLSC administrator, Helen Brown says, “We are very proud of him.  He has done so well. He came second in the State Titles and travelled to Perth to compete nationally.”

Originally from Emerald, Tumaka has lived in Gympie for the last seven years, and works for Deen’s Electrical Service.

Tumaka has been in the Rainbow Beach Club for over three years, and says is pretty relaxing, professional and genuine, “Thanks to Ron Organ getting me involved – it’s been fun.”

“I really haven’t trained specifically for the sprints and flags, but was playing touch football twice a week. I also did three master comps and states leading up to the Aussies.”

Tumaka stresses that to compete at this level, training is very important and says you really need a good group to help you along and practice against.

“I will be training next season properly to compete at this level, with advice and tips from coaches who specialise in this area.”

When asked for hints for our nippers, he says, “Technique is really important. Have a look at Simon Harris, he has won numerous open titles and he has the fastest start in flags. Try not to over think while waiting for the whistle at the start of race and plenty of practice!”