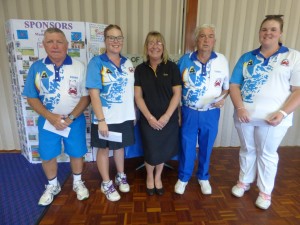 The Tin Can Bay Ladies Bowls held their two day Mixed Fours Carnival on May 2 and 3. The visiting teams enjoyed the hospitality and friendship extended to them and declared they want to return for our next carnival.

The greens were running beautifully thanks to Mick the greenkeeper and his team.

There were five round winners then a lead, a second, a third and a skip were randomly drawn to also receive prize money.

The Tin Can Bay Ladies Bowls would like to sincerely thank the generous support of the sponsors who made the Carnival possible. President Judy Hammond thanked the volunteers and umpire Peter Murphy, as well as the raffle ticket sellers for their work.

President Judy also thanked Donna Townsend, the games director, for the tremendous effort she put in to make the Carnival happen.

Pictured is T. Townsend’s team from Tin Can Bay who came in at second place. Two of the team are juniors from the Tin Can Bay Club.  What a great effort girls!  Peter Kenmen had three juniors in his team also.