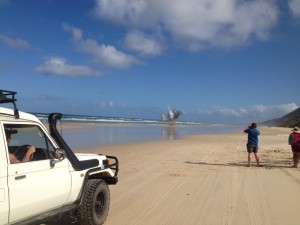 The moment the army blew up an UXO on Teewah Beach

‘Me and all my dumb mates’!

That’s the name of a Facebook page dedicated to the performance of stupid and reckless acts by a group of hoons from around South-East Queensland. Unfortunately part of this group’s playground seems to be Teewah Beach, where they regularly gather in their four-wheel-drives to terrorise campers and other beach goers.

Early in November, Mick and I received an anonymous tip off that ‘Me and all my dumb mates’ were intending to spend another weekend at Teewah, so we thought we would go down there and meet them.

Usually it’s a difficult task to find someone along the 15 kilometres of camping zone on Teewah Beach, but not when you’re dealing with ‘Me and all my dumb mates’. They welcomed us with a lengthy display of hoon driving which resulted in one of the ‘dumb mates’ coming for a drive with us to Rainbow Beach for a breath test.

This bloke, who I shall call Dumb Mate 1 (DM1) for the purpose of this story, returned a Breath Analysis reading of 0.162%, which means his licence is now suspended until he has the matter dealt with in court.

The story of the ‘dumb mates’ does not finish there. After issuing DM1 the necessary paperwork, we started driving back to his campsite on Teewah Beach to drop him off.

We only made it to the beachfront carpark in Rainbow Beach when we were greeted by the sight of the DM1’s vehicle coming up off the beach being driven by Dumb Mate 2 (DM2), who happens to be the alleged author of the Facebook page.

DM2 was trying to help DM1 by coming to Rainbow to pick him up (despite being told repeatedly that we would drop DM1 back), but unfortunately DM2’s driver’s licence was suspended because of too many indiscretions.

So now DM1 and DM2 get to have another outing together at the Gympie Magistrates Court.

Oh and by the way, they were driven back to Teewah Beach by DM1’s brother, who was sober, had a licence, and was in the car with DM2 when we pulled him up. ‘Me and all my dumb mates’; an appropriate name!?

I know I go on about road safety in my articles, but these are the kind of people you are sharing the road and the beach with.

Not only do they have little regard for traffic and other laws, they are actually proud of their efforts to break them, and in the process they compromise the safety of other road users. So please stay alert while driving; you don’t know who is coming the other way. 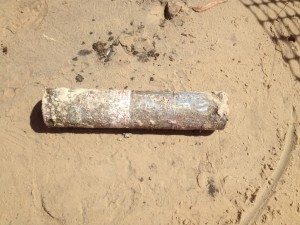 My other story this month also involves an example of ‘not very clever’ behaviour on Teewah Beach.

A couple of months ago I was called down to Teewah after the discovery of an unexploded ordnance (UXO) which had washed up on the beach.

After a bit of driving I found the group of campers who had reported the find – sitting in camping chairs right next to the UXO. They proudly started telling me how they found the UXO a few kilometres down the beach and had picked it up and shaken it. They then put it in the tray of their ute and drove back to camp, where they tried to hack it open with a knife.

It is about this point in the story when one of the group has noticed the warning label on the UXO stating, ‘DO NOT HANDLE – NOTIFY POLICE OR MILITARY’.

After moving the group a safe distance away from the UXO, I contacted the Department of Defence who sent a couple of explosives experts up from Enoggera to examine, and destroy, the device.

The UXO turned out to be a marine signal marker containing phosphorous which burns white hot when activated. A period of time after washing up, these types of UXO will start to dry out and then the phosphorous can contact the air and start burning again. Shaking or moving the UXO will increase the risk of this reaction occurring.

These kinds of items are not uncommon to this area. If you find a suspicious item washed up on the beach, assume it is a UXO and do not disturb it.

Call the police and we will arrange for it to be disposed of safely. The only people who have been seriously injured by UXO’s in Australia are the ones who have handled or mistreated them.