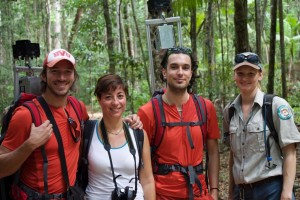 What do German travel agents and Italian trekkers have in common? They all stayed in Rainbow Beach in recent months.

Rainbow Beach was on the “must-see” list in 2014 for new Australian, nature-based experiences. Its natural beauty and laid back feel captured the hearts of travel agents and media people who returned home with positive things to say about our town.

They visited due to the hugely successful Australia’s Nature Coast (ANC) marketing campaign that promotes natural attractions in the Sunshine Coast, Gympie/Cooloola and Fraser Coast regions.

The campaign is recognised by major tourism bodies as one of the best. The increase in European visitors to the region was a direct result of the campaign presence in Europe. This new market includes more mature and affluent travellers who want unique outdoor experiences.

The hiking trails, forests and national parks of Australia’s nature coast are now being mapped and accessed online throughout Europe. Two Italian outdoor enthusiasts and their company, “Trail Me Up”, reaches places Google street view can’t, and provides people with virtual tours.

The Italian crew creates film footage of walking tracks across the globe, along with documentary-style information on the environment, terrain and climate. Potential visitors use this as a planning tool for completing the walks in any country themselves. 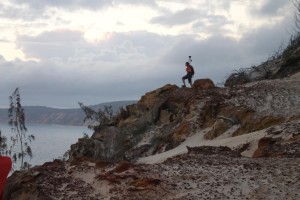 These guys only visited five regions in Australia. But they visited our Rainbow Beach to film sections of the Cooloola Great Walk. Carlo Sandblow provided a spectacular end point after they had filmed from Bymien to Poona Lake and back to town via the sandblow. They arrived in time for a perfect sunset and returned to film at sunrise, before heading to town for breakfast and a coffee.

The footage of Rainbow Beach will reach the German, Italian, French, Swiss and Austrian markets. The campaign will go live in March 2015 and run until October 2015. It fits perfectly with the nature-based theme promoted in the ANC campaign in Europe.

A group of six senior German travel consultants also visited Rainbow Beach in December. They experienced first-hand our nature-based product, as well as how the ANC regions come together for packaging travel itineraries. The agents are now ambassadors for Rainbow Beach and all it has to offer German travellers.

Rainbow Beach Commerce and Tourism President, Mark Beech, supports the cooperative approach to raising the profile of Rainbow Beach in the European market.

“We are seeing clear evidence of the positive results of the larger group marketing campaign.”

“European agents are actively seeking new product for their clients and Rainbow Beach is emerging as a stand-alone destination suitable for a multiple night stay, due to its geographic location and access to Fraser Island. The visits reinforce our position in the regions and the high quality nature-based product on offer.”

Mr Beech mentioned the opportunities for business operators in town to become involved in the ANC campaign, which is investing over $750,000 in advertising the regions. He is happy to discuss this with operators who want to be involved.

To take a look at the Trail Me Up website and watch their walking trail filming journeys, visit www.trailmeup.com in March.