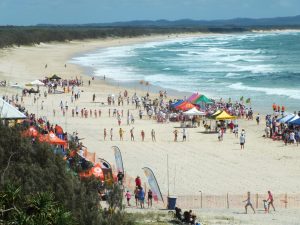 Over 800 competitors are expected for the 2016 Nippers Carnival on October 15.

The fluorescent pink rash shirts are everywhere on the beach, and the town is booked out as families and clubs make the most of the first carnival of the season.

And it is not too late to join Nippers, with the first session for 2016/2017 season starting on October 2!

The Rainbow Beach Nippers program is for boys and girls aged between 5 and 13 years of age (age as at September 30).

It involves a two-hour commitment each Sunday and cost only $165 per family!