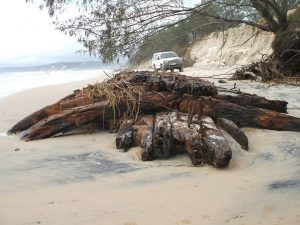 The amount of erosion needed to expose the MV Natone

Following last month’s article on the Trish Burgess book ‘Wyatt Earp – the little ship with many names’, I had a chat with local resident Col Mills, who has his own memories to add on the ship locals call the MV Natone.

Documented as one of Australia’s most famous ships, the Natone was wrecked here on January 24th 1959 during cyclonic weather.

All 18 seamen, six Europeans and twelve Papuan, survived the ordeal and were hurled ashore at Eight Mile Rocks (Mudlo), after a wild ride to the beach using life buoys and hatch covers as surfboards atop mountainous waves.

In 1959 there was no settlement here at Rainbow Beach and the city access was via the beach from Tewantin or on foot from Carlo via boat from Tin Can Bay. A rusty old tin shed was situated near where the lifesavers tower is today. Light keepers were stationed at lnskip Point and Double Island Point

Col said: “I was working in Brisbane when the Natone went down at Rainbow and it was some years afterwards before I visited Rainbow again and by that time there was no visible evidence of the wreck.

“However over the years, usually after an episode of extremely rough weather and the subsequent beach erosion, remains of the wreckage, of what I believe to be part of the Natone, are uncovered.

“Some years back there were some doubts as to whether the wreckage is that of the Natone or another boat that went down off Rainbow some years earlier called the St Magnus.

“However when old locals like Gordon Elmer, Harold Simpson and Jim Samon vouch that it is the Natone then that’s good enough evidence for me.”

The Natone was built in 1919 in Norway as a fishing vessel, Fv Fanejord. She was purchased by American Lincoln Ellsworth in 1933 for his Antarctic expeditions, who renamed her MV Wyatt Earp.

The Australian Government bought her in 1939 and she was renamed HMAS Wongala and served in the Australian Navy until 1947, when she was converted as an Antarctic exploration vessel and was recommissioned as HMAS Wyatt Earp in anticipation of her Antarctic voyage.

Finally, in 1951 she was decommissioned and sold to the Ulverston Line, who renamed her MV Natone, to carry cattle from Queensland to New Guinea. It was on a voyage from Cairns to Brisbane in 1959 that she ran aground at Rainbow Beach during wild weather. All on board survived the ordeal.

On January 23rd 1959, the old ship, now renamed MV Natone after a large potato growing area near Ulverstone, Tasmania, left Cairns under her Master, Captain PH Gosschalk and that was her last journey.

Gary Splatt has immortalised the MV Natone by constructing a truly stunning static model of her which sits at the Rainbow Beach Sports Club and which was sponsored by Sam and Maureen Mitchell, and is well worth a visit if you haven’t already seen it.

Previous articles such as The bones of HMAS Wyatt Earp and the story on Trish Burgess book Wyatt Earp – the little ship with many names are at rbcn.com.au in the Search Our Site on the home page.