As reported by the Maryborough Chronicle: Wednesday, July/17/1889.

“The following message from the Telegraph Office at Maryborough has been handed to us:–  A fore and aft schooner, the Florence Peat, from Townsville to Brisbane, with railway iron, has been anchored at Double Island since last Saturday through stress of weather. The gale and sea increasing, her crew of six men left her and landed at Double Island this (Tuesday) morning. She was last seen at noon today (Tuesday) and is supposed to have foundered at her anchorage. She is nearly a new vessel, and the property of Mr Peat, of Hawks Bay, New South Wales, and was uninsured. She was found the next day on the beach, seven miles from Inskip Point, between there and Double Island Point, literally broken up into matchwood, she having parted her cables where she was left anchored and driven onto the shore. We may mention that on Sunday, the captain tried to put back inside Tin Can Bay from where he was anchored at Double Island, but the wind falling he had to drop anchor again. On Tuesday morning when the crew left the vessel she was not making any more water than usual, but as the sea and wind were increasing the captain thought it useless and too risky to remain on the vessel so they went ashore at Double Island leaving the vessel snug at her anchor, and the fate she has now come too is stated above.”

26/12/1958. As stated in my book, ‘Lights of Cooloola’, articles were printed in the Courier Mail, and Maryborough Chronicle and Gympie Times about a “Mystery Wreck” that was found by the Sterling brothers of Kandanga, half way between Inskip Point and Double Island Point in shallow water about 100 yards off shore. They described it as a large quantity of steel railway line lying on top of the wreck.  “There are also 3 iron boxes which cannot be opened. It appears to be a wooden boat but it is hard to tell because it is heavily encrusted with barnacles”.

Brisbane Shipping authorities say they are sure the wreck is that of the Dugong that was wrecked on the Wide Bay Bar in 1913. The dugong was wrecked 6 1/4 miles North of Hook Point leads in September 1914. It was built by Walkers in Maryborough in the eighties.

If anyone has more information on this, it would be great to hear from you so we can positively lay claim to our mystery wreck.

Marian Young (mariangyoung@gmail.com) is the author of “Lights of Cooloola”, available at Newsagents in Rainbow Beach and Cooloola Cove. 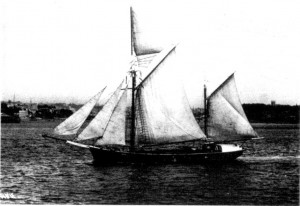