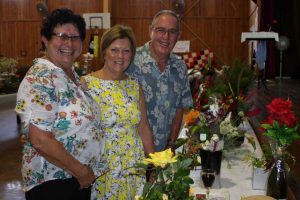 Judy Cantrell, Maree and Phil Heron discuss the themed displays – spotting”Days of Wine and Roses” and the “Yellow Rose of Texas”

Held on the last Saturday in September, organisers noted that there were a lot more entries than last year.

After sourcing some raffle tickets at the entry, I chatted to Lisa Lee who was making a brisk trade at the plant stall.

Lisa said the judges had visited Maryborough and Nambour, but were delighted with what they saw in our comparatively smaller Tin Can Bay.

“They love coming here – and said it was such an excellent display. The standard was really high.”

The judges commented that the number of entries was most impressive and a great tribute to the local community spirit.

This year, the photography entries were in the main hall, and they were blooming for all to see and deem which deserved the “People’s Choice” award.

Lionesses were feeding tables of people when I arrived, as they listened to a performance by the Coolabay Choir.

Their six songs all related to gardens, flowers and nature. Pat Graham told us, “One of our members had found a parody of the song  An English Country Garden in which we remembered the ..bindies…bull ants… cane toads…and all the spiders and other ferocious insects, that make growing difficult.”

It provided a lighter tone to the proceedings and was joined by Tulips from Amsterdam and Oh What a Beautiful Morning with the bees (men’s voices) humming in the background.

That morning the UKE Circle was also very well received by the visiting public, and I was told it “flat out” with people – in spite of the unseasonal hot weather. It was good to hear the lunches and morning teas were “going crazy”.

The prizes for the winning entries were presented by Bob Gray, OIC Rainbow Beach Ambulance. The champions in each section were Linda Brown for Floral Work, M O’Gorman for Cut Flowers, Shirley Ruescher for Container Plants, with the Juniors prize going to L Dennis.

L Minchell and Molly Dallinger were awarded the champions prize for the Open and Junior Photography sections respectively.

LAC’s Cheryl Zunic thanked the various clubs and individuals who were on hand to support the show with stalls, displays and the provision of morning and afternoon teas, as well as all the people who took the time to place an entry in the competition.

Said Cheryl, “The committee offers our thanks to all those involved in making the day a success, with the money raised being used to support our local Ambulance Stations at Tin Can Bay and Rainbow Beach.”