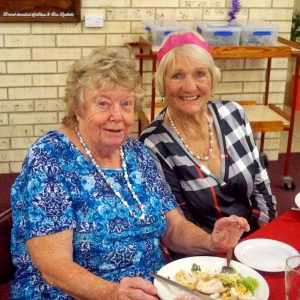 Rainbow Beach Over 60s met for their annual Christmas luncheon on at the Cooloola Bowls Club, where a great smorgasbord meal was provided and eaten on tables beautifully decorated for the occasion.

The first called right, left, train had a parcel circulating around the table to the person on the right, or left, or across the table (train) whenever those words were read out by our president. After much confusion and lots of fun there was a winner to open a parcel at each of the three tables.

The second was called parcel stealing which provided a lot of interest and some smooth underhand moves by those in the know.

Each member brought along a gift-wrapped parcel and when your number was called you could either select a parcel from the table, or if you liked a gift already opened, you could “steal” it from the recipient, who had to surrender it and chose another for themselves.

A present could only be “stolen” three times before it was no longer negotiable. Needless to say the bottle of wine was stolen three times in extra quick time.

Next function is a morning tea at the Rainbow Beach Surf Club on Tuesday 10am, February 7.

Arrangements are in place for a five-day, four-night outing to Agnes Water during the last week in March. The LARC has been chartered for a day trip up the beach to the Bustard Head Lighthouse, and The Gift, a five bedroom house, has been booked for accommodation for ten and core activities. Twenty six members have expressed interest in the adventure.