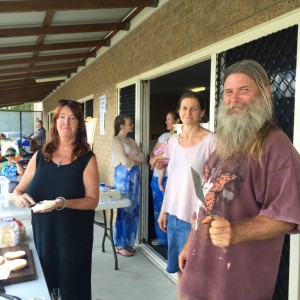 After a successful trial of a drop-in centre during the holidays, the service will continue to run on 5pm to 8pm on Saturdays during Term 1, and they are asking for your help.

Located at the Cooloola Cove Veterans and Community Hall, Chappy Ronnie Timperon said the program was well received and ran on Wednesday and Saturday nights in January.

“Between 16-20 young people have been gathering each night to play eight ball, table tennis, outdoor volleyball, watch a movie and enjoy snacks, under the supervision of a dedicated team of community volunteers.

“A quantity of punching bags and gloves has been donated and we are looking for someone who has expertise in this area to provide supervision. Other activities being considered are a variety of sports, music and longer-term projects such as rebuilding BMX bikes.”

It all came about after a Youth Project Stakeholders Meeting was held in the Tin Can Bay School Hall, facilitated by the Community Development Team from Gympie Regional Council.

“The meeting was attended by over 25 members of the community, school staff and students. During the meeting, lists of strengths, concerns, suggested activities and people willing to volunteer their time were created.

“It was very encouraging to see the level of support from the community for our youth and their willingness to be involved,” smiled Ronnie.

The working group decided they would start with a holiday drop-in centre, and further activities will be organised throughout the year.

Volunteers are required to have a blue card – free of charge for voluntary organisations.

If you would like to make a donation to the Cove and Bay Youth Project or have skills that you feel would be of interest to young people, please contact Maureen Willis on 0435 807 877 or Chappy Ronnie on 0413 135 867.