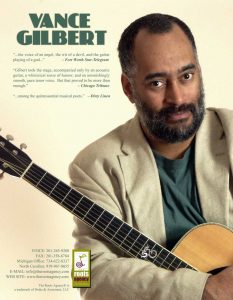 Vance Gilbert from the USA has been selected as the international act for the Festival of Small Halls Queensland Summer Tour 2017.

Vance Gilbert burst onto the singer/songwriter scene in the early 90s in the folk clubs of Boston – an ex-multicultural arts teacher who was knocking ’em dead at open mics. Vance Gilbert took audiences across the country by storm.

He is joined by Melbourne’s Liz Stringer for the best folk and contemporary music which hits the road from Ilfacombe, Texas to Valla! Only $25 per ticket for 13+ and free for children 12 and under. Rainbow Beach, December 10. https://festivalofsmallhalls.com/