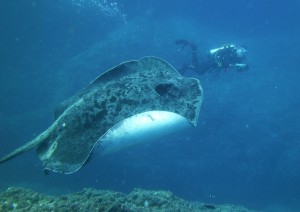 We’ve had some spectacular diving at Wolf Rock last month.

Whilst grey nurse shark numbers have been below average, the rays and other animals have made up for it. The strong currents we have been experiencing are what the bull rays love and they have been making the most of it!

We are seeing up to around 10 of them gathered on a regular basis, and the average size is about 2 metres across the body. Eagle rays are also growing in numbers hovering in the current amongst the bull rays. On our last dive we saw a squadron of around 30 of them swim just above our heads.

Giant Queensland gropers have been seen regularly, and even though we have not seen more than about 8 sharks they are all really big – mature sharks around 3 – 3.5 metres in length. Leopard sharks have been prevalent, as well as schools of barracuda.

Water temperature is 23 degrees and we have been enjoying some fantastic visibility at around 25 metres.

As this will be our last report for 2015, we would like to wish everyone a very Merry Christmas and safe and Happy New Year.