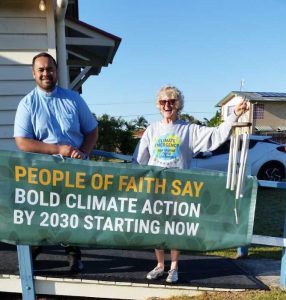 Across Australia on Sunday October 17 2021 over 120 faith communities were involved in the Faiths 4 Climate Justice global Day of Action, including the unfurling of a banner in Tin Can Bay at the St John Vianney Catholic church.  More than 475 actions were held in no fewer than 43 countries.

Both Margaret Mountford and Maggie Travers are passionate about climate action and justice.  Maggie, wearing her windcheater proclaiming: “Climate Emergency our shared moral challenge”, rang the chimes to sound the alarm.

As people of faith, we believe that the Earth and all people are sacred.  Faiths 4 Climate Justice are calling to global decision makers for an immediate end to new fossil fuel projects, deforestation, and related financing.   For a massive commitment to green jobs to reduce climate pollution and end poverty for millions; and climate reparations from wealthy countries to equip vulnerable nations for a better future.

The unified ask of the climate movement is for “a commitment from the Federal Government/major parties for a national plan to slash climate pollution this decade with strong targets that at minimum match our key allies the United States, the United Kingdom and trading partners such as the European Union and Japan”.