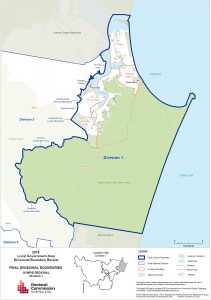 Wallu has been officially excluded from Division 1 following a review of the Gympie Regional Council’s (GRC) divisions by the Local Government Change Commission (Change Commission).

Each division of the GRC needs to have a similar number of voters at the upcoming March 2020 election, so that each person’s vote has the same value.

A quota is determined by dividing the total number of enrolled voters by the number of councillors (other than the mayor), plus or minus 10% – the GRC region has 36,736 with an estimated 38,783 by 2024.

Only four comments were received from our region against the change.

One comment requested the council become undivided (no divisions), however this is outside the scope of this review and was unable to be considered by the Change Commission.

The other three comments conveyed opposition to the proposed transfer of the Wallu area from Division 1 to Division 2.

As the primary purpose of this review was to ensure each division has a similar number of voters so that each person’s vote has the same value, the Change Commission has been unable to accommodate these proposals.

The Change Commission recognises the likelihood that the growth expected in Division 1 may trigger another review prior to the 2024 election.