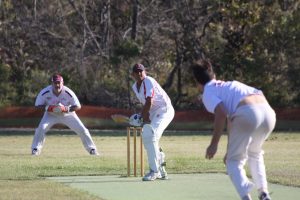 Captain of the Rainbow Beach Cricket team, Merv O’Neill, is smiling. “I am 99% sure we’ve booked ourselves a spot in the final.”

It was a hot Saturday afternoon in Rainbow Beach, the Gympie Colts declared 5/203, and were out fielding on the first day of the last two-day match of the season.

As we watched on, Merv said, “They are running third and they are one point behind second place – we lead the second team by 12 points.”

Securely in first place for two-day matches so far, and victorious in the one-day final in January, Merv ventures, “We’ve had a good season, and only lost one game so far.

“It has been a vast improvement on last year – we’ve pretty much the same players as last year, just a couple of additions.

“But look at the ground, how much better is it? I think that has encouraged them to play.

Merv reports the younger cricketers are often down here playing, unlike the rest of the team balancing work and family life, who have managed their success without many practices.

“Unfortunately no, you can’t put it down to training.”

But never mind, town is watching – and looking forward to a great result. The finals are at One Mile Ovals, Gympie, over three days in the first two weekends in March, finishing with a presentation. Best of luck!