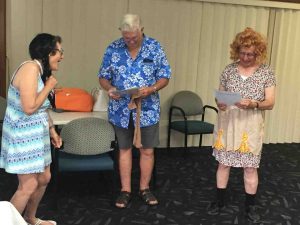 The skit by Kaye Olson, Don Beaton and John Olson brought a lot of laughter to Probus members

The month’s highlight for our Probus Club was the Changeover luncheon held at the Tin Can Bay Country Club.

Everyone else received their badges of office. Members Judy Kiddle, Arthur Leggo, Jo Said and John Aird have earnt their ten-year pins.

Entertainment was provided by Judy Kiddle, Don Beaton, and Kaye and John Olson, who prepared the skits whilst holidaying on Norfolk Island together last month. John made a lovely woman!

At our monthly meeting, Judy and Kaye gave members an illustrated talk about their adventures.

Meetings are held on each second Monday of the month, 2pm at the Sandcastle Motel, Tin Can Bay. We welcome new members. Contact Daryl: 0416 739 324 or cooloolaprobus@gmail.com.