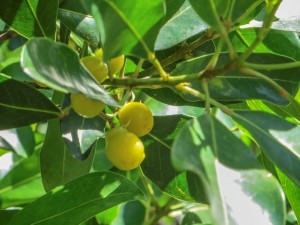 Plant of the month is Cupaniopsis anacardioides (Tuckeroo), a small tree to 10 metres or so, growing in a range of locations including dry rainforest. It has small, green/cream flowers in panicles followed by orange, three-lobed fruit that break open to display a black seed in a red covering.

Rainforest is described as an ecosystem where dense vegetation exists under a closed, often layered canopy.

When the land mass that would become Australia broke from the supercontinent of Gondwana fifty million years ago, the continent was largely rainforest. Over time, most of it disappeared and now only scattered remnants survive.

Queensland has most  of the country’s rainforest and North Queensland is home to the largest share, much of which is protected by World Heritage status.

Rainforests vary and are often classified by the climate in which they exist, for example, tropical, sub-tropical, dry, warm/cool temperate, littoral and riverine.

The common  view of a rainforest is of lush vegetation, and complex rainforests do fit this image with a layered canopy and a wide variety of plants in the understorey, such as epiphytes, lianas, tree ferns, palms, orchids and strangler figs.

These occur when soil is fertile and rainfall is high. Less complex rainforests exist in drier places and have fewer layers in the canopy and a less varied understorey.