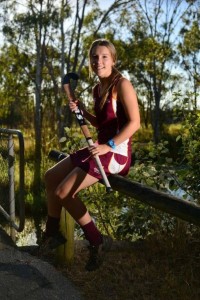 Although Chloe has played for Queensland for the last four years, it was in the under 15’s and Under 13’s sides.

Chloe says playing for the Opens Country Queensland team has been her greatest achievement so far.

One of the youngest players there, Chloe says the Toowoomba tournament “was a huge learning curve for me, teaching me so much about the elite level of hockey I have dreamt of playing”.

“Winning the championships against NSW in the grand final was definitely an amazing feeling, especially coming back after losing to them in the semi. I was lucky enough to score three goals throughout the tournament which also felt great.”

Not only has Chloe represented Queensland in various age groups she has travelled across the country and even around the world for the sport – touring to Canada and USA with Wanderers Australia.

New residents to Rainbow Beach, Chloe’s parents Sean and Simone moved here with Chloe and her four siblings Will (14), Kaine (12) Olivia (10) and Gracyn (8). They have been visiting here for thirty years from Gladstone, where her Dad Sean still works with a Gas Plant.

I asked Chloe how she balanced her training with the bus, school, study and work (you’ll see her at Creme de la Creme and 13th Beach). She said, “Since moving to Rainbow six months ago it has been extremely hard getting into Gympie for trainings. I manage to train Wednesday afternoons and play Friday evenings. However, I set aside time for school, study and work.”

Now in Grade 11 at St Patricks College, and keen to attend University, she hopes that by the end of Year 12 she will have some direction as to what she wants to do.

“I aim to keep improving in hockey and take on board all the tips I have been given by coaches throughout the eleven years I have been playing the sport. By improving, I hope to keep progressing into more representative teams – my next goal is the U18 QLD Team.”

Congratulations Chloe, we wish you well!