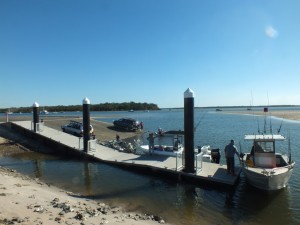 Local fisherman have advised the Community News of issues with the new boat ramp at Carlo Point.

Nick Lattanzi called during the Fishing Comp and told us, “I can’t go to work today.”

His boat’s propellers were grounding at the base of the ramp, causing damage. Nick said what was effectively an all tide ramp, was now only useful for larger crafts close to high tides.

Greg Pearce said, ” I know at least a dozen boats in the last two weeks that had damage occur.” He has placed a warning on his facebook page “for anyone with a large boat who power loads it”.

“The recent replacement of the ramp has left it dangerously shallow at low tide with both the ramp and the rocks placed at the end causing propeller and damage to many boats including mine in recent weeks. This is particularly bad on the eastern side adjacent to the new pontoon with depths of less than 600mm at low tide on that half of the ramp. The western lane has both the deepest ramp and most water off its end and is the safest to use at low tide.”

Dennis Robson wrote to us of his concerns back in May and June stating, “The angle of the ramps have been modified and have resulted in the ends of the ramp being some 7 metres longer than the old. To accommodate this the construction has required a large amount of rock to be dumped into the basin at the end of the ramp to the point where the basin no longer exists.”

He stressed there will be problems with navigation, drive on/off launches, congestion and beach access.

On completion of the ramp, Dennis wrote, “The ramp is fine at high tide to half tide, the top three pontoons do not float they are constantly on the old ramp.. this makes for an interesting pontoon with a hump in the middle.”

He was concerned that “boat owners experienced problems with this depth especially the inboard motor boats as they grounded on the ramp or rocks before they reached their trailers or water edge on the ramp. Those with the roll off/roll on trailers could not get enough speed up to position the boat back on the trailer so if they had them filled had to resort to winching the boat onto the trailer.”

However Transport and Main Roads (TMR) have reacted swiftly, Greg said, “To their credit the Department of Main Roads are working to fix this as quickly as possible and should be commencing work to deepen the ramp.”

A TMR spokesperson confirmed this, stating, “We’re aware some operators have recently experienced issues when launching or retrieving larger vessels from the Carlo Point boat ramp during low tides.”

“We’ve arranged for the contractor to re-lay the bottom six rows of planks at a steeper grade to provide another 0.5m of water depth at low tide.”

“We will also remove sediment and rock built up around the toe of the boat ramp and near the houseboat hire lease to further assist.”

He advised that these additional works are scheduled to begin 6 August and will take about two weeks to complete, weather permitting.

The ramp will remain open during the works however some lanes may be restricted to ensure the safety of boat ramp users and the work crew.