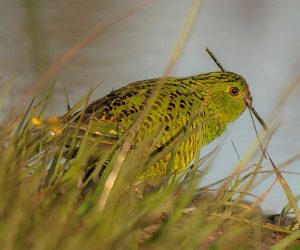 There is no doubt we are fortunate to live in such a beautiful area of Queensland, right here in Rainbow Beach, but sometimes taking a closer look in the natural areas just outside our town can reveal just how amazing this whole location is.

Not far from Cooloola Way, in the Cooloola Recreation Area of Great Sandy National Park, there’s a small population of the vulnerable, shy, and elusive eastern ground parrot, one of only five ground-dwelling parrots in the world.

Living and feeding amongst the dense and sometimes swampy coastal heath, which is mainly low banksia bushes, bracken and grasses, ground parrots are usually not seen unless flushed out from cover.

If you are lucky enough to see them, you’ll recognise them by their bright grass-green plumage, with black and yellow markings and a prominent pale yellow wing bar.

If unbothered by your observance, you may catch them feeding on the ground, eating seeds of sedges, grasses, herbaceous plants and shrubs.

Silent in flight, the presence of ground parrots is often only revealed by its characteristic dusk and dawn call, a clear whistling sequence of notes which rise in pitch before fading.

When it comes time to prepare for breeding, ground parrots construct a nest, which they conceal in low shrubs, made of a shallow bowl of fine sticks and grass, mostly lined with leaves, grass stalks, ferns, and small twigs.

The female incubates the eggs, the clutch being 3 to 4 eggs, and broods the young whilst being fed by the male, who also feeds the young when they hatch.

Foxes, dogs and cats, as well as land clearing, have decimated the population throughout Australia, so we are blessed to have a small group living here in our beautiful region, and we have a great responsibility to ensure they thrive well into the future.