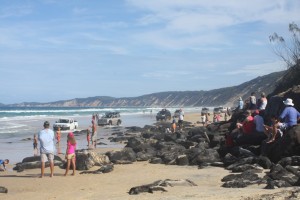 The rocks provided some entertainment!

I am sure we have used this headline before. But it’s true. Day, after day, after day of sunny weather saw visitors swarming to the Cooloola Coast.

The crowds were definitely noticeable at low tide, as there were queues at the service stations and hardly any parks to be had around town. Our beaches will never be as insanely crowded as Bondi, but they were bustling. A popular spot was the lagoons at Double Island Point and they were surrounded by vehicles. With such busy times we were very lucky to have the roving surf patrols and extra volunteers.

Andrew Hawkins, from Rainbow Beach Realty, was very pleased with this holiday season. “This has been our best summer ever, with record bookings in January and a fully booked out Australia Day long weekend, as well as multiple sales contracts being signed over the holiday period.”

“The year ahead looks set to be a great one. Easter vacancies are going fast and next Christmas/New Year’s is already half full.”

But accommodation providers weren’t the only people to smile.

“We always have good seasons – boating is such a popular pastime. But this was really good; there were lots of boat hires.”

Sam reports that he is seeing more and more first time visitors, as well as regulars from Maryborough, Hervey Bay and Gympie.

“This season we saw people who haven’t been to the area before and we met quite a few of the locals and business operators. The great weather always helps! We’ve been really happy.”

Across the water, Scott Barker from Tin Can Bay Family Butchery enjoyed his second festive holiday in the business. He said, “Everyone’s up this year, there’s definitely a lot more holiday goers.”

“The whole centre has been a lot busier for everyone. I sold more meat, especially BBQ stuff than last year, that’s for sure! Especially ham, steaks, BBQ packs – that’s what I’ve seen.”

Scott said it the season has stretched throughout January into the Australia Day long weekend. 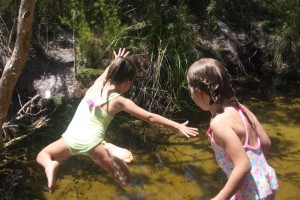 Campers had a great run with the weather and were close to capacity at peak times, while the Fraser Island campsites were full.

Rainbow Beach recently received a brilliant rap in the New Zealand Herald, thanks to an organised tourist family and Destination Gympie Region. The article raves about our coloured sands, Cafe Jilarty, Arcobaleno, Ocean Palms Resort, Rainbow Beach horse rides and the sandblow. Feeding dolphins at Tin Can Bay was also highlighted in the article.

If it couldn’t get any better…we are officially one of the nine most incredible beaches in the world, according to the Huffington Post. To be honest, though, to us locals and visitors who return year after year, it is just a matter of time before we’re first on the list!